Speed and Kulture Magazine, formerly known as Traditional Rod and Kulture Magazine, was re-invented by U.S Army Veteran, Chuck Stanfill, and Trent Sherill, a talented hot rod and traditional pin-up photographer. Together, they’ve established this renewed publication with one goal in mind; To become a platform on which Americana can be immortalized. Their mission is accomplished through a beautifully printed,  coffee-table-worthy magazine, printed quarterly, that features some of the best stories, talented craftsmen, and interesting history from America’s rich hot rodding culture. Side A of the magazine is dedicated to pre-1960’s Americana, while on the flip side B of each issue you’ll find articles dedicated to Americana from 1964 through 1980! Speed and Kulture has become a historical society of sorts. As a Veteran owned company, every issue also contains homage to past and current service members from every branch of the military as a thank you for their service and sacrifice.

For the past year, I have been working on an Americana inspired painting series called, “She’s Been Everywhere, Man”. These ten paintings, created in automotive enamel, not only feature some of America’s most iconic places and classic cars, but the majority of the artwork in each painting was directly inspired by Trent’s photography. You can become a She’s Been Everywhere Insider on Facebook to see some behind-the-easel content and OFFICIAL show date for the art exhibition. Be sure to check out more of Trent’s vintage inspired photography here. With seven of the ten paintings complete, Trent and the team at Speed and Kulture generously offered to feature the series in the winter issue of Speed and Kulture Magazine to announce the official art show exhibition, coming in April of 2022. Trent, as the head magazine editor, began collecting the unique stories and custom cars he wanted to feature for this issue. When he knew what would be printed into the magazine, he asked me to design the custom Speed & Kulture  Magazine cover and centerfold design that would highlight three of the beautiful cars that would be showcased in Issue 9 of Speed and Kulture Magazine; The Orange Crate, a genuine Superbird survivor, and the most incredibly painted Peake’s Camaro! 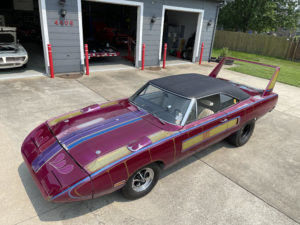 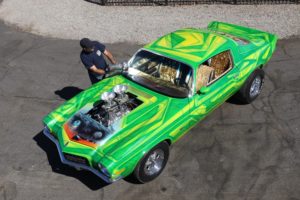 As in my She’s Been Everywhere Series, Trent sent me the beautiful raw photos he captured of each of the cars for their magazine debuts. He had some really great ideas for the cover art that where directly inspired by the custom painted airbrush mural of Roadrunner and Willi E. Coyote found on the deck lid of the Superbird Survivor. He gave me creative freedom for the overall look of the cover but requested that the Superbird be in a winning race against the Camaro in a familiar carton desert landscape. My thought was, “What’s a cartoon desert without a falling anvil”? This is where I was able to incorporate the title of the magazine. 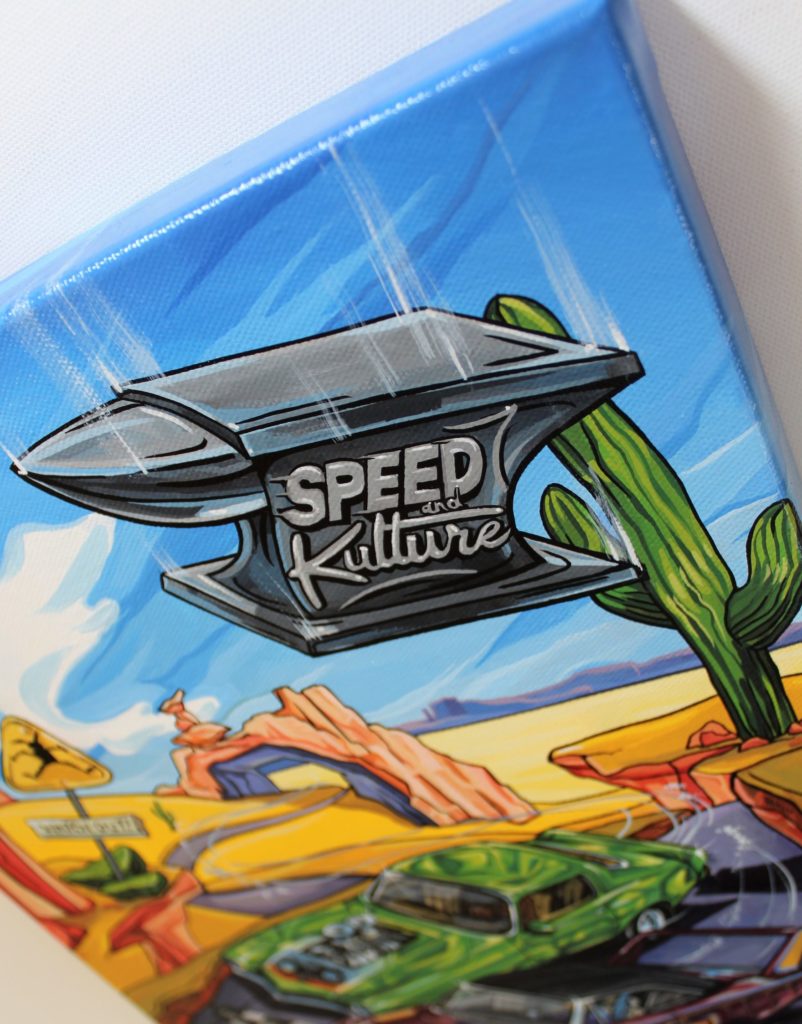 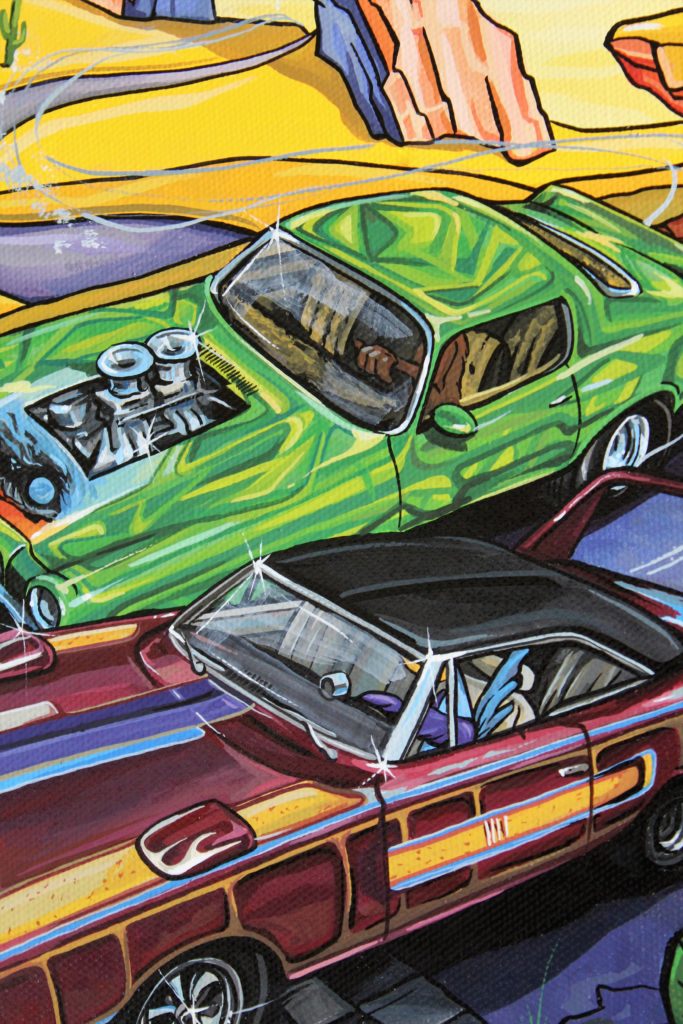 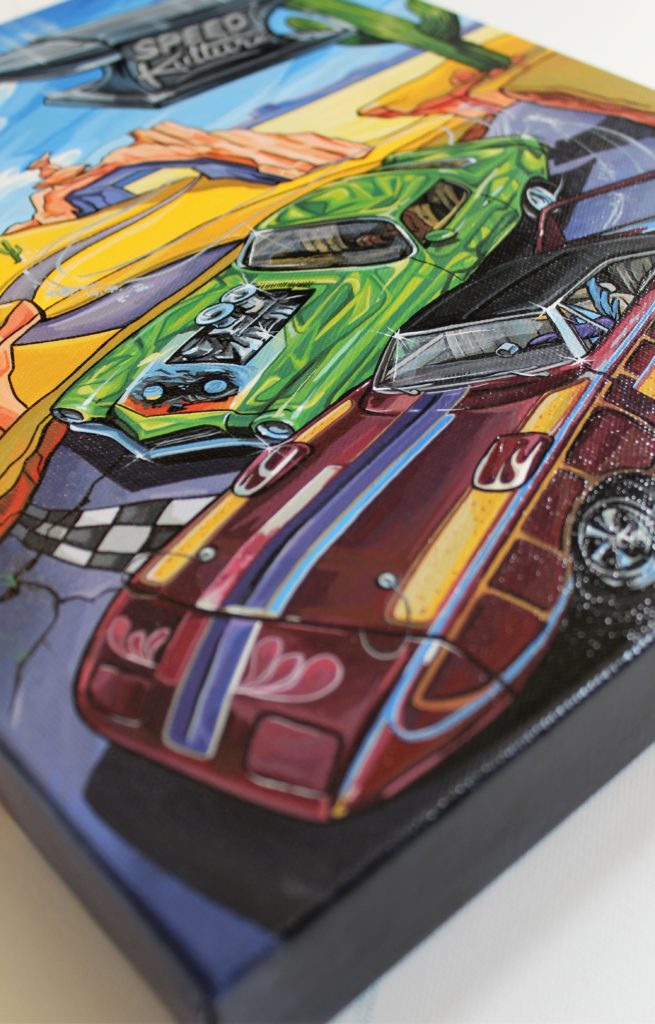 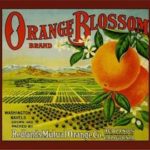 For the centerfold design of the Orange Crate we pulled inspiration from the Revell toy model box cover of the car. Being from California, I remember my mom decorating with vintage orange crate labels as framed art in our house. The labels were incredibly colorful with beautiful layouts that had a lot of depth. I tried to incorporate the feel of a vintage crate label into the overall design of The Orange Crate painting.

The cover art was painted using Apha 6 automotive enamels on a gallery wrapped canvas panel. The Orange Crate was painted using Alpha 6 automotive enamels on a custom pearl white painted panel by Overspray Customs. It was then custom framed in Austin, Texas, at Agave Print. For both paintings I designed thumbnail (small) sketches to help show the layout of the design. The artwork was then drawn by hand with pencil onto 11”x14” tracing paper. Once Trent approved the final pencil sketches of each design, both drawings where transferred onto their perspective 11”x14” canvases using Saral chalk paper. The artwork was then painted using a combination of Tidwell’s Monster Stix, Fox Tails, and Broken Pinky brush sets. You can purchase any of of these amazing brushes here. 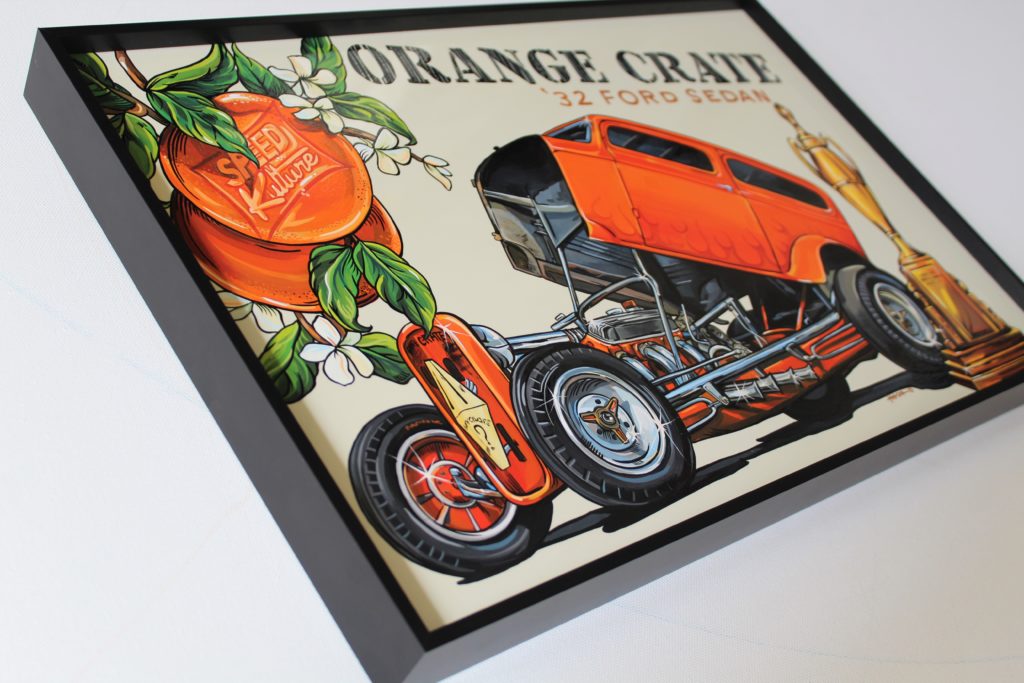 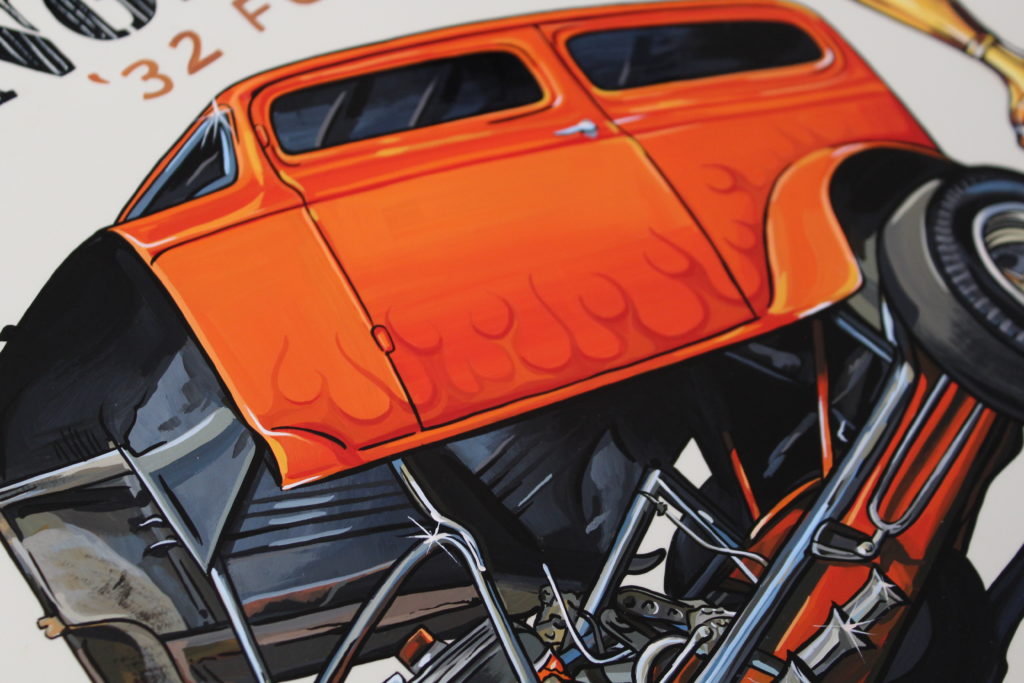 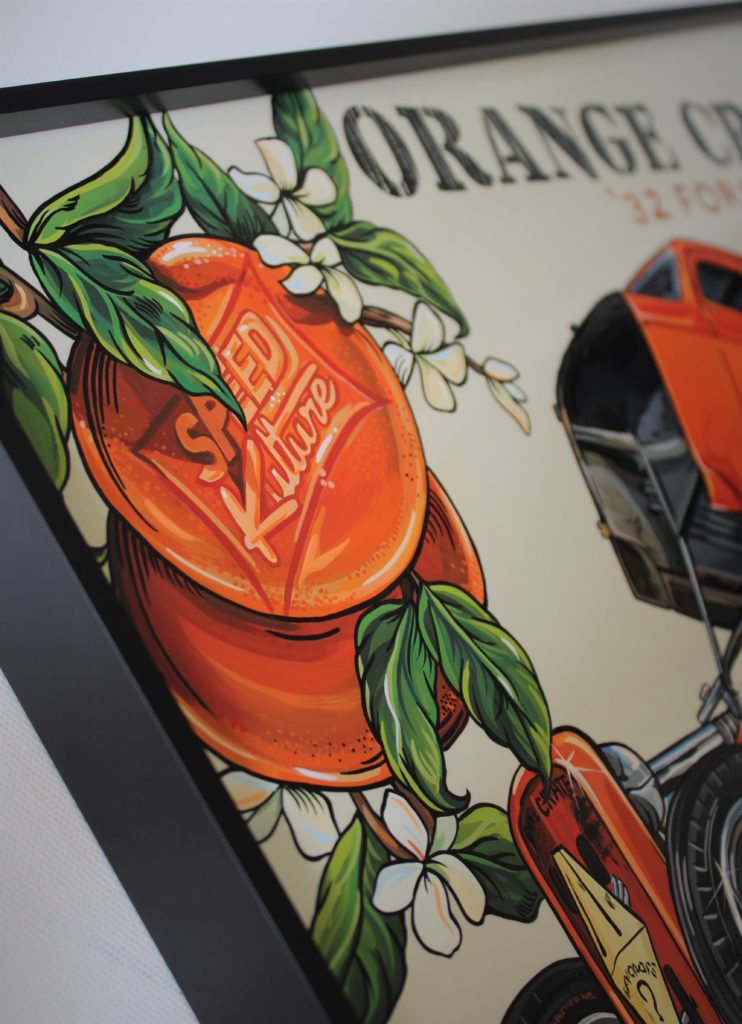 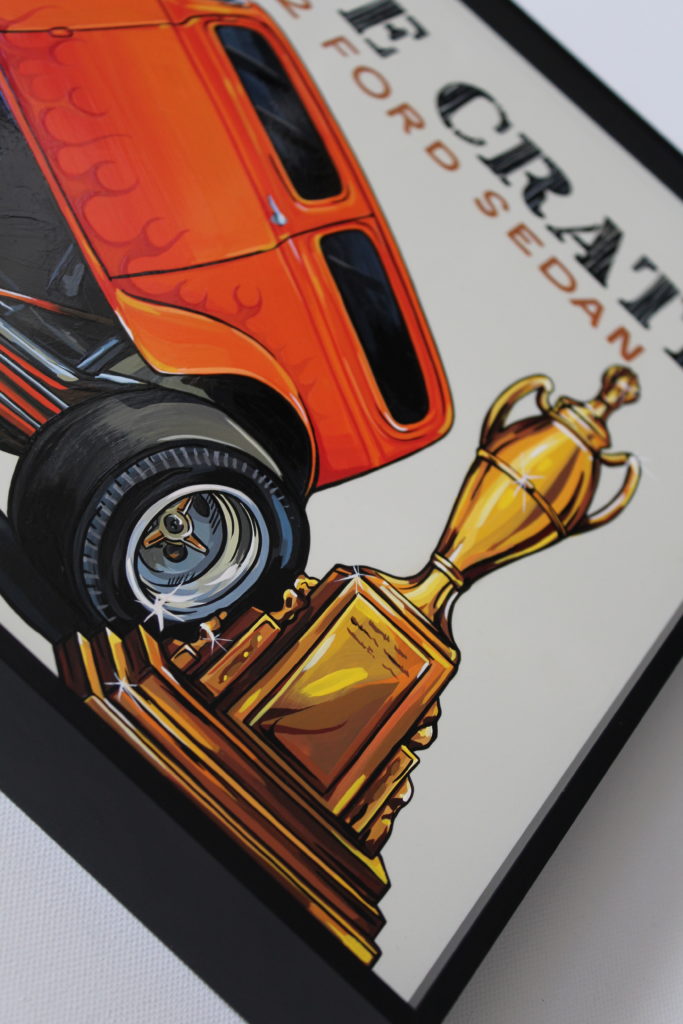 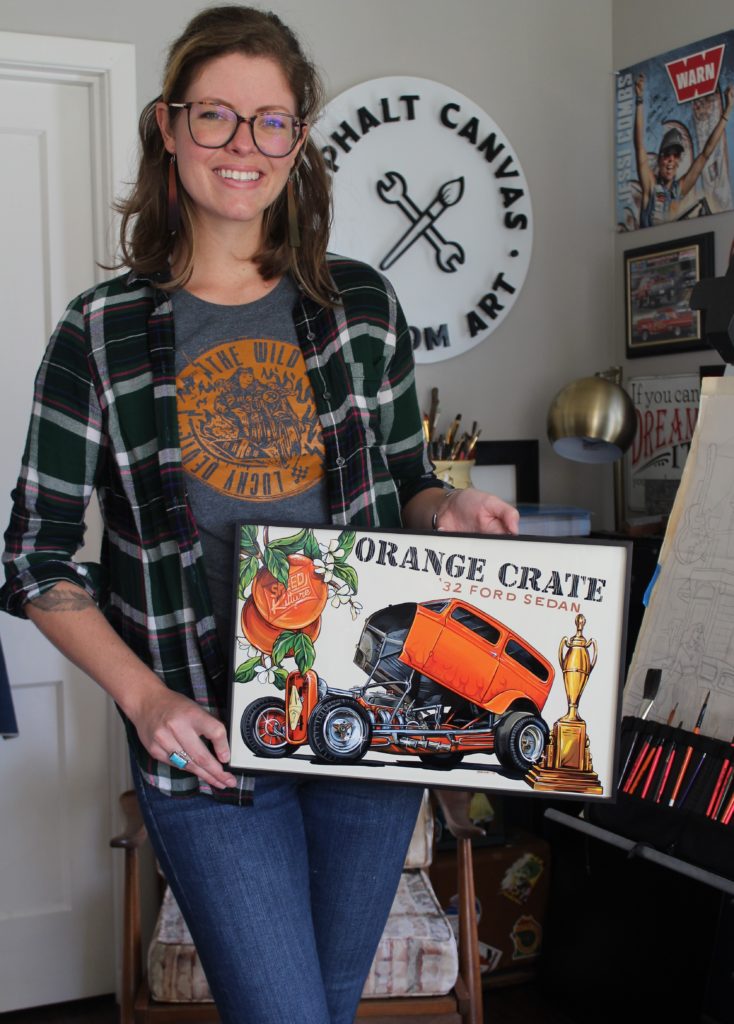 You can own a poster of The Orange Crate artwork I created by solely purchasing Issue #9 or subscribing to Speed and Kulture Magazine. The custom cover artwork however,  is a limited edition print of Issue #9 and will need to be purchased separately because Only 100 copies with the Superbird and Camaro cover painting will be printed and sold **As of 2/8/2022 the limited edition magazine with cover art has SOLD OUT! Large scale posters of each painting are STILL available through the links below:

The chance to share my artwork with all of America, through a publication like Speed and Kulture that parallels so closely with my passions and beliefs, is a very special and meaningful opportunity. From the “She’s Been Everywhere” series, to this custom art collaboration, working with Trent, Chuck, and the team at Speed and Kulture has been a joy and ultimately, a dream come true. I look forward to holding this issue in my hands and working with them again, in the near future.