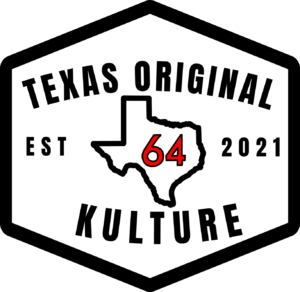 With this special project, my husband, Morgan Cook, and I worked together to create an overall paint scheme that matched his vintage NasCar vision for our 1964 Dodge Polara Project Car. The end result ultimately inspired Morgan to start his own business called Texas Origainal Kulture, a lifestyle brand featuring the “mostly true” stories about the people, places, and things found only in the great state of Texas.

When Morgan and I were still dating, my kid brother had purchased a 1964 Dodge Polara to flip and sell for profit. Although he did an amazing job shining up the car, it still had four doors and proved a tough re-sell. Luckily, Morgan had lofty dreams of owning a four door Mopar and with a trade of a gun and a Harbor Freight bench press, the Polara ended up with Morgan as its new owner. My brother was elated when we got engaged because it meant the car would stay in our family.

Over the next few years, Morgan and I drove the car without many upgrades! We even took it on a week-long trip from Texas to Nevada on Route 66 for SEMA 2018…More on that trip later! During that time Morgan dreamt up his ideal Polara build and paint scheme pulling direct inspiration from his great uncle’s and Pepaw’s Chevy Dealership in East Texas and vintage Nascar graphics from the 60’s.

We used his family’s 1960’s car dealership logo as the starting point for the overall look of the graphics on the car. We switched out the Chevy lettering in the logo and replaced it with the word “Dodge” in a font we felt was era correct with the year of the car. 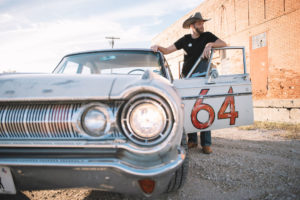 From there, Morgan collected vintage stickers and graphics he wanted used as inspirations for the rest of the hand painted graphics. He was careful to find era correct logos for the products and companies we’ve actually used to build and maintain the Polara in modern day. We chose the race number 64 for the doors because of the year of the car.

While we were planning all the details of the car’s graphics, we had dropped off the Polara’s ratty seat frames for new, red,  hounds tooth interior by Fox Auto Body. Not only did they rebuild the seats for us, but they came complete with hand sewn dodge emblems in the top center of the back rests and sleek silver cup holders in the front bench. We are so enamored with the look and comfort of these new seats. 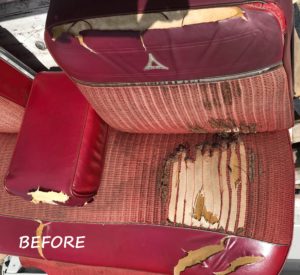 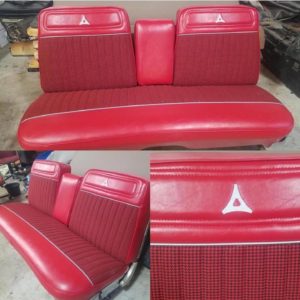 The Polara’s body was in pretty great shape with the exception of some water damage and rust around the package tray and lower quarter panels. We knew we wanted a car that would be ok to “daily drive” even with a new paint job. When we saw a rat rod with a sparkled candy painted roof and a flat black paint job on the body of the car at The Lonestar Roundup, we knew we had found the perfect combo for the Polara. After growing a friendship with Josh and Lorna from Inline Six Paint and Body we knew they were the perfect fit to recreate this unique kind of  satin and gloss paint job. With the help of my dad and brother, we stripped the Polara of all its trim in one night and dropped it off for paint Inline Six Paint and Body. Over the next few months, Josh rebuilt the cowl and multiple other rusted out areas with brand new hand shaped steel panels for the car from scratch. He painted the body of the Dodge with a satin white color carefully saving some of the original scuff marks and creating a few of his own, giving us a beautiful full body faux patina paint job in white. He then painted the roof with a bright and glossy candy red color! If you ask me, the magic in the unique paint job is all  found on the sail panels of the Polara where the satin patina white paint and gloss candy red paint collide.  We can’t say enough wonderful things about Inline Six Auto Body and that paint and body work they mastered for us on the Polara build.  They created the perfect backdrop for me to paint the vintage logos on.

I used Saral Paper and Alpha 6 Enamels to transfer and hand paint all the logos. Unfortunately, it was pouring rain in Texas during most of the paint work I did for the car. Therefore, I spent one week working down one side of the car, scrunched up against the wall in our one car garage, and then Morgan would back the car out and turn her around from me to work down the other side of the car the next week! This still makes me laugh, but hey, a one car garage is better than none at all!

The last logo I painted on the car was a tribute to the nickname that stuck with Polara since the first day my brother owned the car; The Polar Bear. This nickname came from my brother’s love of vintage coca cola ads with the Polar bear family, the car’s original 50th anniversary white and red interior and paint and the close proximity of the name of the car to that of a polar bear. I used the bear from the late 1950’s cartoon “Chilly Willy” as reference to create the little ice racing polar bear graphic. 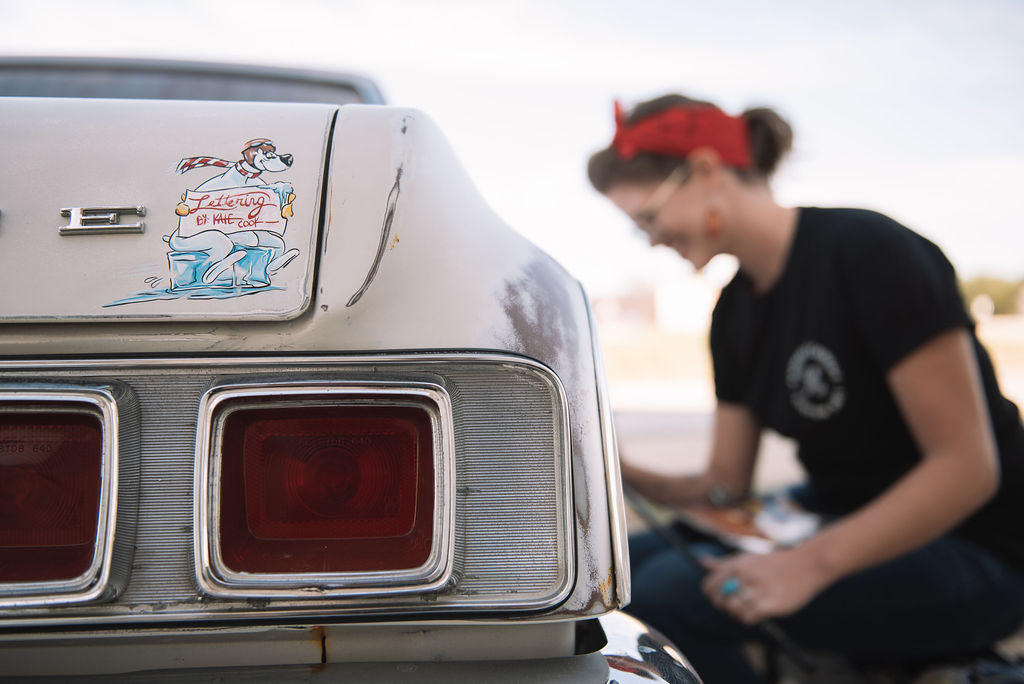 Morgan and I had a blast bringing this vison to life. Since the fresh paint update, he’s installed a new headliner, carpet, and exhaust. You can see a lot of the build photos and videos on Instagram, using the hashtag #64polarbear. As most you that have a project car know, we still have a list of “To-do’s” for the build including a new trunk pan, engine rebuild, and bead rolled interior door panels. Recently, Morgan has also launched an exciting new line of Texas Original merch featuring the Polar Bear!

We are reminded every time we jump in the Polara for a cruise that none of the work done was on our own. We are so thankful to our friends and family who have cheered us on and helped us with this passion project. Building a car is a team effort and we wouldn’t have it any other way! We are looking forward to continuing to create memories with car and attending its first big show/cruise in April 2022 during the Hot Rod Tour of Texas. Stay tuned!

A huge thank you for Stefanie Thomas Photography for capturing these killer photos!

If you enjoyed this post, be sure to head over to my husband’s Polara Origin Series Blog posts and become a Texas Original! You can find a lot more “in-progress’ photos of the logos being painted on my ’64 Dodge Polara Pinterest Board!