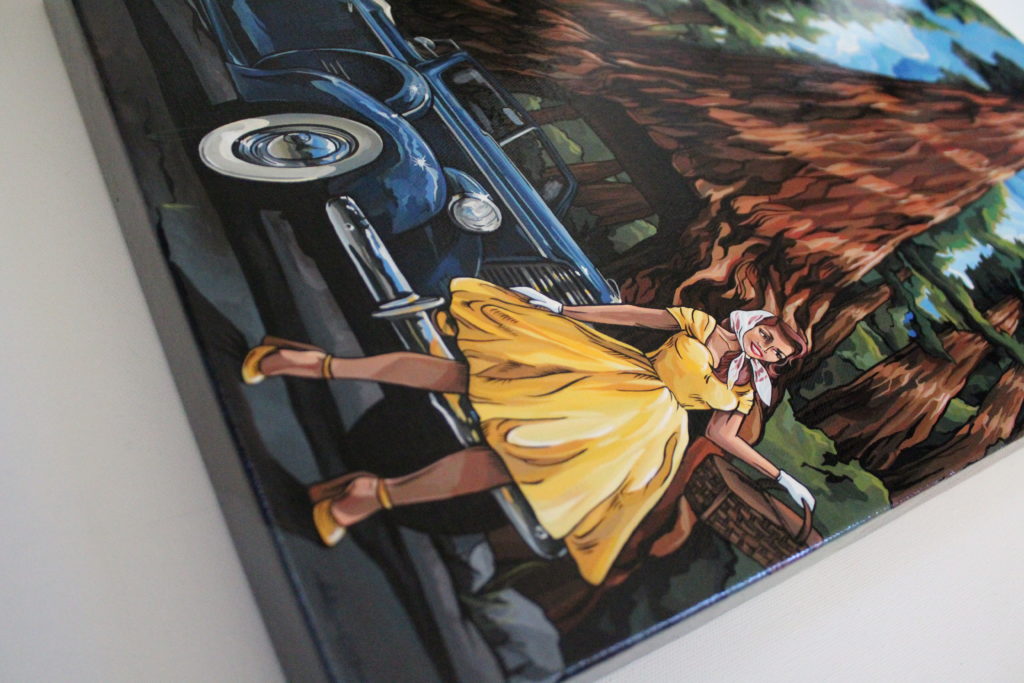 In September 1890, President Benjamin Harrison signed legislation establishing America’s second national park, Sequoia National Park, in the southern region of the Sierra Nevada Mountains in California. Created to protect the giant sequoia trees from a long history of logging, Sequoia National Park was the first national park formed to protect a living organism: Sequoiadendron Giganteum. Early access to the “Giant Forest”, as it’s now called, was limited to little more than a pack road and only a few wagons a year could access the trail to see the trees. Eventually, the popularity of automobile travel led to the building of the Generals Highway in 1926 opening up the Giant Forest to increased visitation. Under the direction of President Franklin D. Roosevelt in 1940, Kings Canyon National Park was also included into the National Park System, and together the two parks have grown to encompass 1,353 square miles of big trees, 97% is designated and managed as wilderness.

Today, the two parks are most notably known for their massive sequoia trees including the 5 tallest trees in the world, the most famous being the General Sherman tree, the largest tree on Earth by volume. It stands 275 feet tall, and is over 36 feet in diameter at the base. The Giant Forest has faced decades of logging, forest fires, drought, and even prescribed burns observed and maintained by California firefighters to help the growth, health, and longevity of the majestic and historic trees.

One of my favorite family memories was a road trip we took to Yosemite, California during spring break. We camped in our run-down, vintage Fireball motorhome on Yosemite Lake. We took a full day to visit the Giant forest. The best part was touring the massive trees in the backseat of my dad’s open air, 1989 Jeep Scrambler.

As famous mountaineer and preservationist John Muir stated about the trees, “There are no words to describe how small one feels while standing at the base of those historic trees. The Big Tree is Nature’s forest masterpiece, and so far as I know, the greatest of living things.” In the Jeep, we had the chance to drive through Sequoia Park’s fallen “Tunnel Log” tree! With my mom’s careful planning, we even got to visit Mariposa Grove where we were able to walk under the once drive through standing sequoia tree called the Chandelier Tree. In the tunnel of the tree, there where carved names from the 1900’s which only made the age of the Giant Forest more impactful. 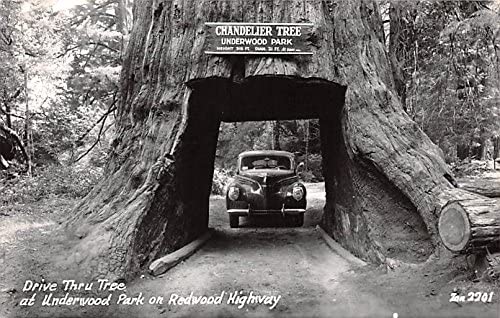 In recent years I was so grateful to tour the Pacific Northwest Redwoods with my husband on a coastal road trip we took in 2019. Those trees are just as majestic and the walking trail and greenery along the base of the trees is an entire different feel that that of the national parks.

Standing in the tunnel of that Sequoia tree as a teenager is a memory that I’ve carried with me. I used to love to day dream about the thousands of cars and families that had the chance to drive through that tree in every stage of America’s history. Those thoughts, combined with some colorful vintage travel posters, is what inspired this painting. Capturing the surreal perspective of standing at the base of the trees and looking up was the most important detail I focused on when drawing up the pencil sketch for the final piece of art. When I saw this Trent Sherill photo of the navy blue convertible and the model’s summery yellow dress, I knew right away it was the perfect focal point for the artwork. The final artwork was hand painted in Alpha 6 automotive enamels on a 12”x24” canvas. As with every painting in this collection, the overall landscape is made up of a collage of images and perspectives that I felt truly represent the reason Sequoia National Park earns a spot on the map of America. 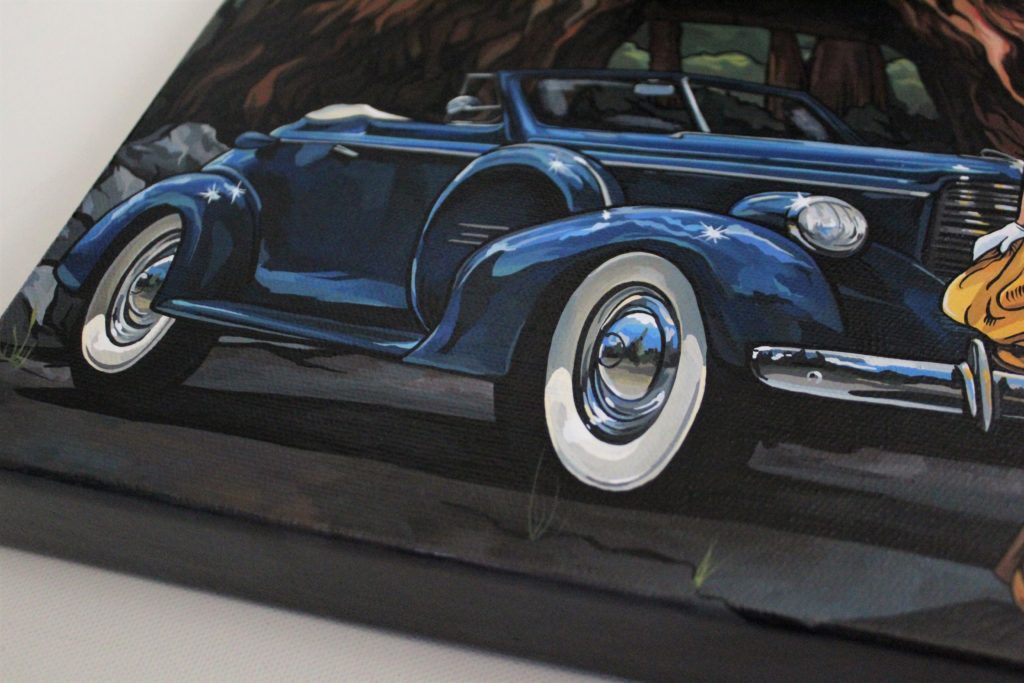 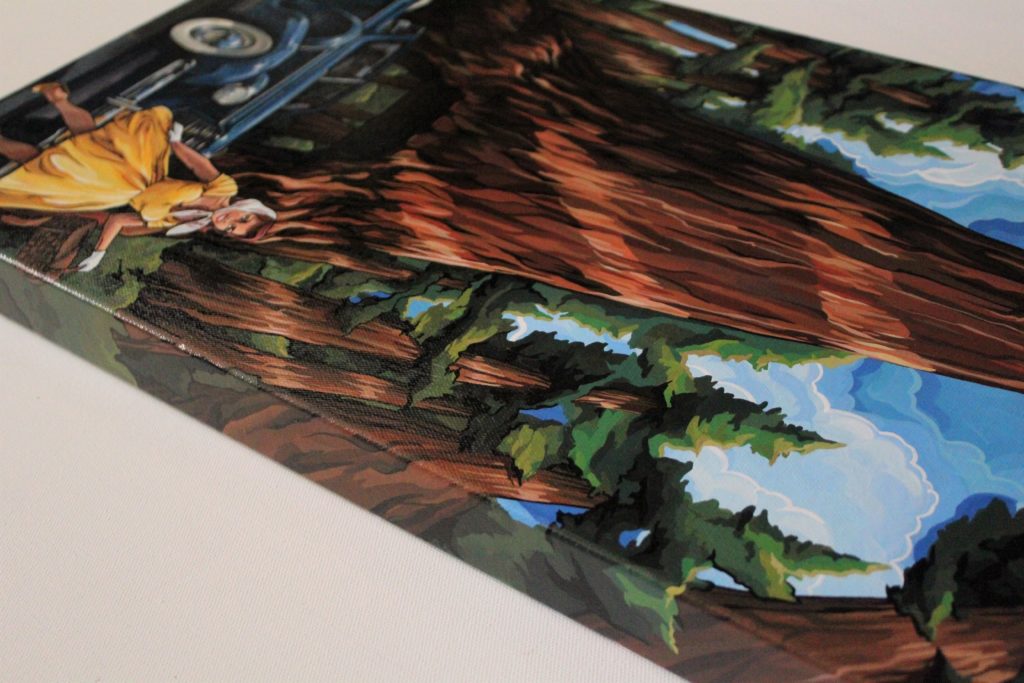 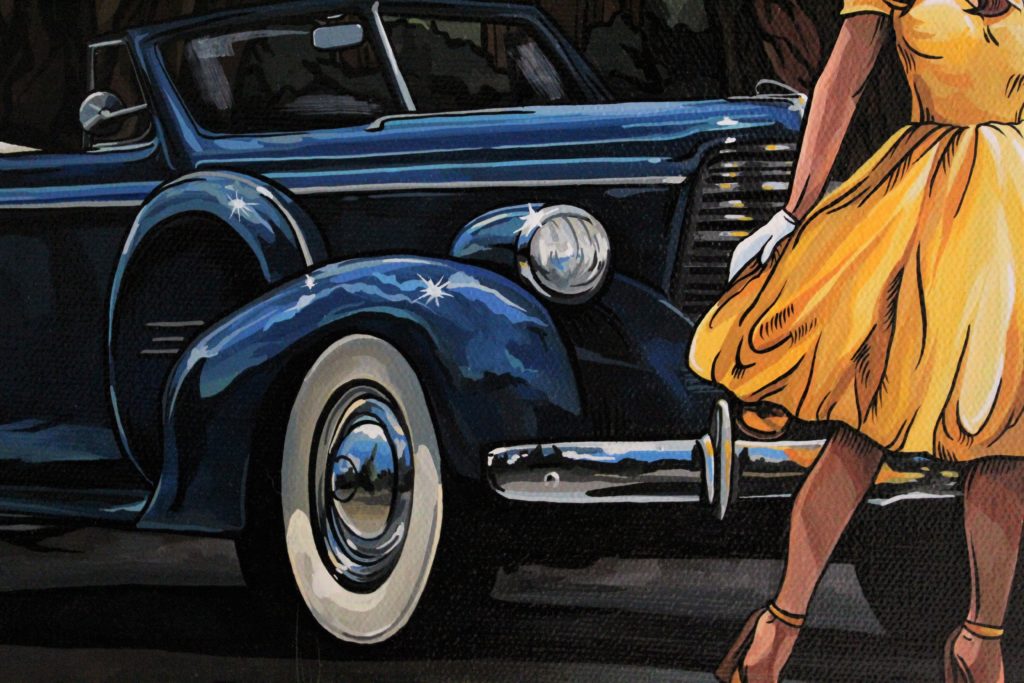 The final “Sequoia National Park ” Painting. Become a “She’s Been Everywhere Insider” here, and subscribe to my newsletter! 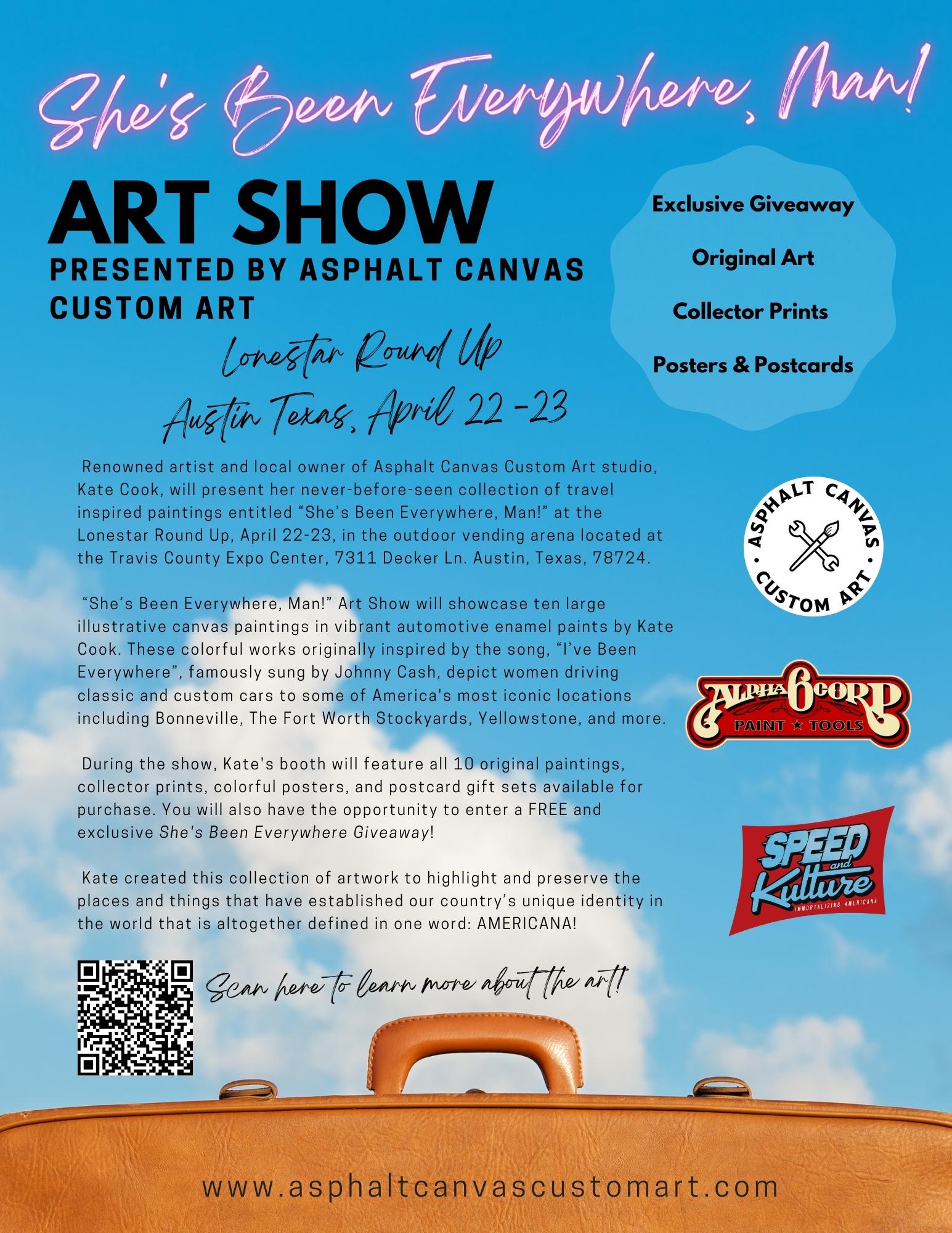