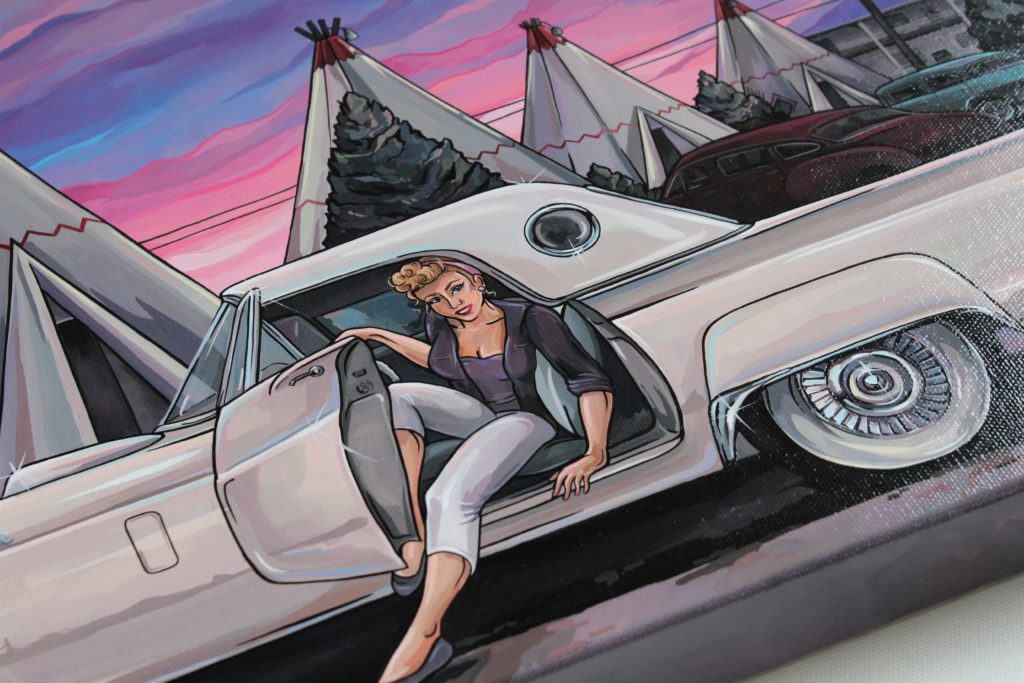 U.S. Route 66, known as Main Street of America or the Mother Road, was one of the original highways in the U.S. Highway System, established on November 11, 1926. The highway, which became one of the most famous roads in the United States, originally ran from Chicago, Illinois, through Missouri, Kansas, Oklahoma, Texas, New Mexico, and Arizona before finishing in Santa Monica, California. Much of the 2,448 mile highway was flat which made it a popular truck route and the route of choice for cross country travelers.

Route 66 passed through numerous small towns in America and, with the growing traffic on the highway, helped create the rise of mom-and-pop businesses, such as service stations, restaurants, and motor courts, all readily accessible to passing motorists. Much of the early highway, like all the other early highways, was gravel or graded dirt. Due to the efforts of the U.S. Highway 66 Association, the road became the first highway to be completely paved in 1938.

After a successful 60 years in existence creating not only jobs and business opportunities for small town America but unique travel stops for the American motorist, the beginning of the decline for US 66 came in 1956 with the signing of the Interstate Highway Act by President Eisenhower. In years to come, Interstate 40 and many others eventually bypassed and ran the entire span of Route 66, slowly killing off the once thriving businesses along Route 66 in small town America. Thankfully, the first Route 66 association was founded in Arizona in 1987 and similar groups across the country have stepped up to restore as much of the roadside attractions and small businesses as possible. Although it is no longer possible to drive US Route 66 uninterrupted all the way from Chicago to Los Angeles, you can still get your kicks on much of the original route that is still drivable with careful planning. 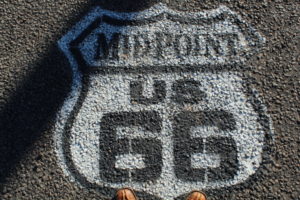 I’m grateful to recall numerous trips on Route 66 with my family at different stages in my life. My first experience on the mother road was as a little girl. We road tripped from California to my family’s farm in Illinois with my brother, parents, Grammie and Papa. My grandparents had traveled the road in its heyday many times in their 1956 Corvair. I was too young to remember a lot of the details from that first family road trip on Route 66, but in listening to my grandparents unique stories of their many adventures on the mother road and with the help of my mom, I was able to map a lot of the historic stops along the route in my later years. These memories gave me the opportunity to share some of the kitschy road side attractions and delicious mom-and-pop restaurants with my best friend and college roommate as we road tripped back home to California from Texas every summer while in college.

There are so many places (some I have yet to see!) to visit along Route 66 that are filled with the kindest, most interesting people, but with every trip we are guaranteed to stop at three of our favorite places: Delgadillios’s Snow Cap for ice cream, Jack Rabbit Trading Post for the best turquoise jewelry and a picture with the rabbit, and the Wigwam Motel for a great night’s sleep in an actual teepee.

More recently, my husband, Morgan, and I had the amazing opportunity to tour the entire route from central Texas to Arizona on our way to the SEMA show in Las Vega Nevada in our 1964 Dodge Polara. We spent our first year wedding anniversary at the Wigwam Motel! 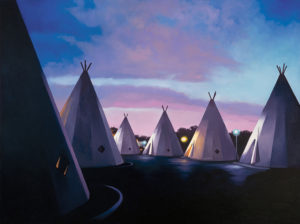 Route 66, with its many attractions and iconic history, could be a spin-off series of She’s Been Everywhere by itself (and one day it may be!). I chose the Wigwam Motel in Holbrook, Arizona to represent the overall route because of its unique setting to traveling tourists along the Main Street of America. I remember each time we’d pull into the court at the Wigwam Motel after a long and adventurous day of driving, the sky always boasted the purple and pink remains of an Arizona sunset. This fond memory is what I wanted to convey in my painting with the purple, blue, and light pink tones of the work. The ivory color of the teepee structures and the classic car created a fun challenge in color mixing. I was careful to make sure each of the separate elements in the painting would look like they are sitting within one composition.

For the focal point of this painting, I wanted to channel the iconic scene from the movie “American Graffiti” of the dreamy blonde girl in the white Thunderbird. With this in mind, I sourced a beautiful vintage photo of movie star, Annette Funicello, sitting in her classic Ford Thunderbird, for further inspiration and clear reference on how I would lay out the drawing of the car and female model. With another photo shot by my husband at a local car show, I was able to morph all of these images together to create the single focal point of the white T-Bird and pin-up girl you see in the final painting. 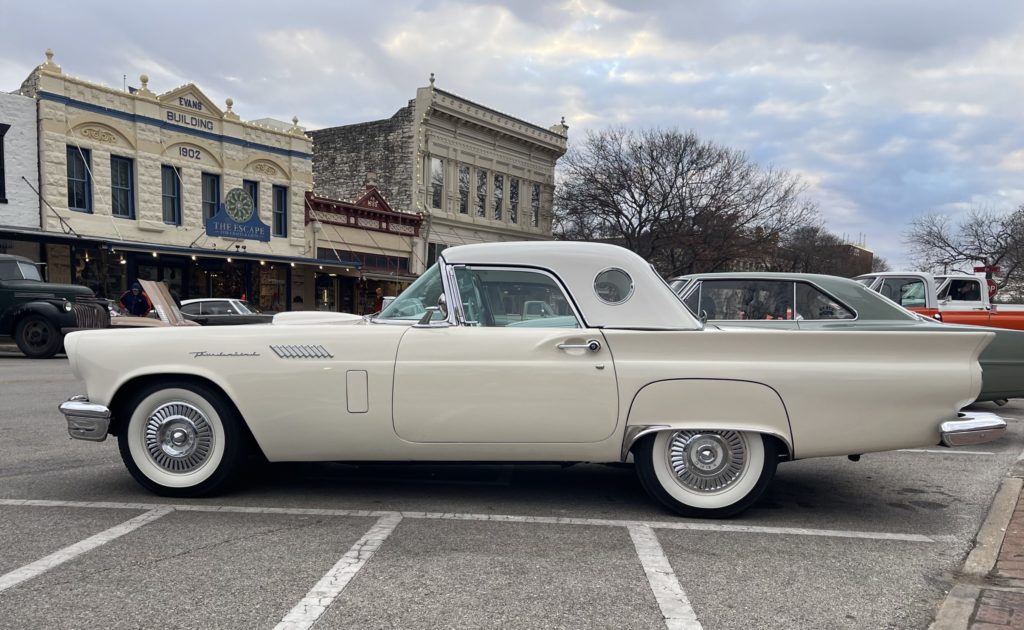 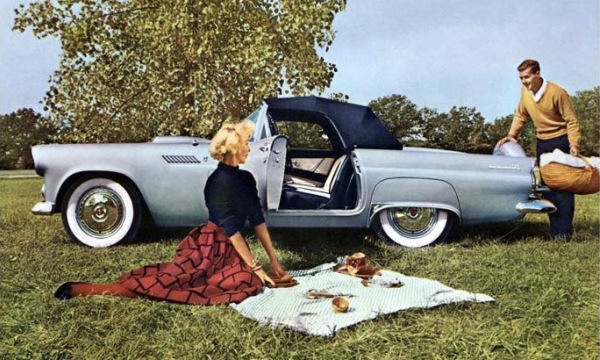 I hid a small jackrabbit in the corner of the painting to honor the five generations in my family who have all stopped at Jack Rabbit Trading Post for a picture with the rabbit and then traveled on to the Wigwam Motel for a good night’s rest.

The artwork was hand painted in Alpha 6 automotive enamels on a 12”x24” canvas. As with every painting in this collection, the overall landscape is made up of a collage of images and perspectives that I felt truly represent the reason Route 66 earns a place in this Americana themed collection of artwork. 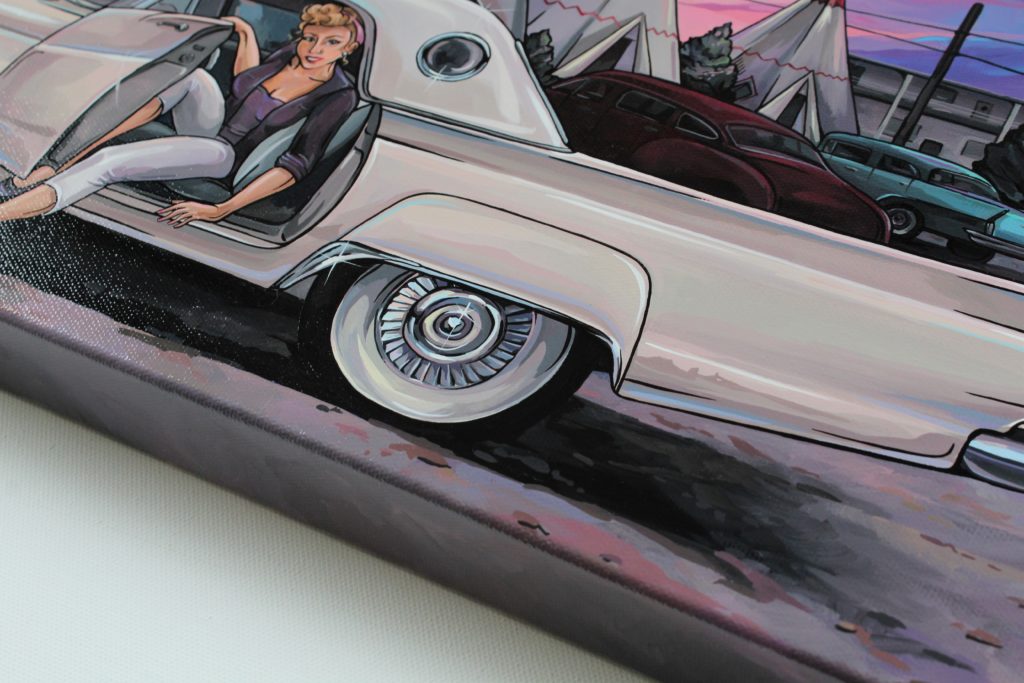 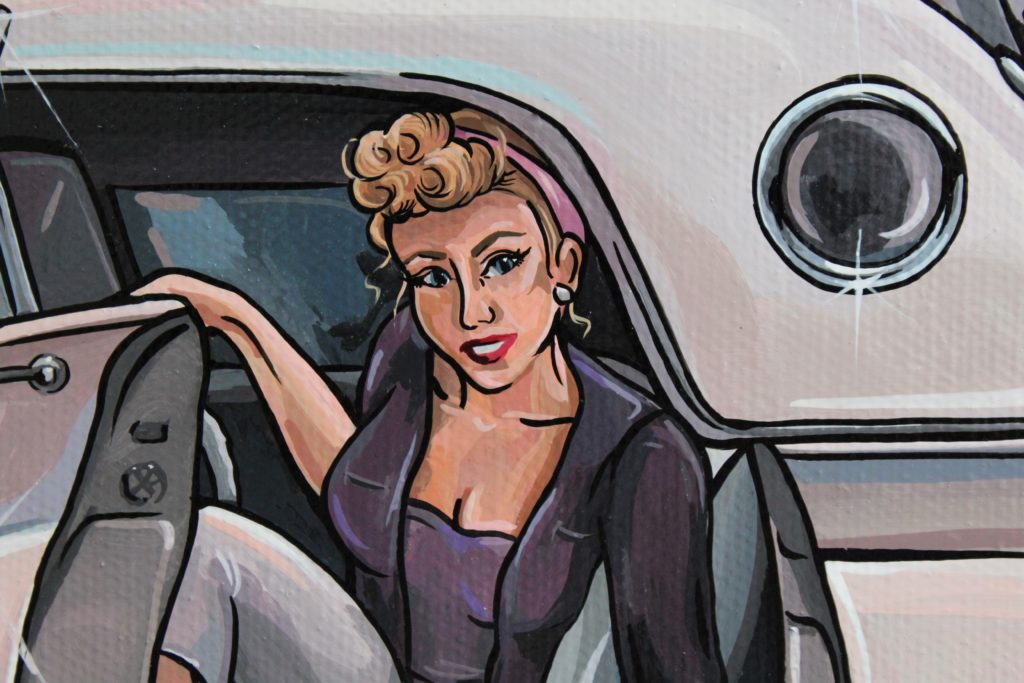 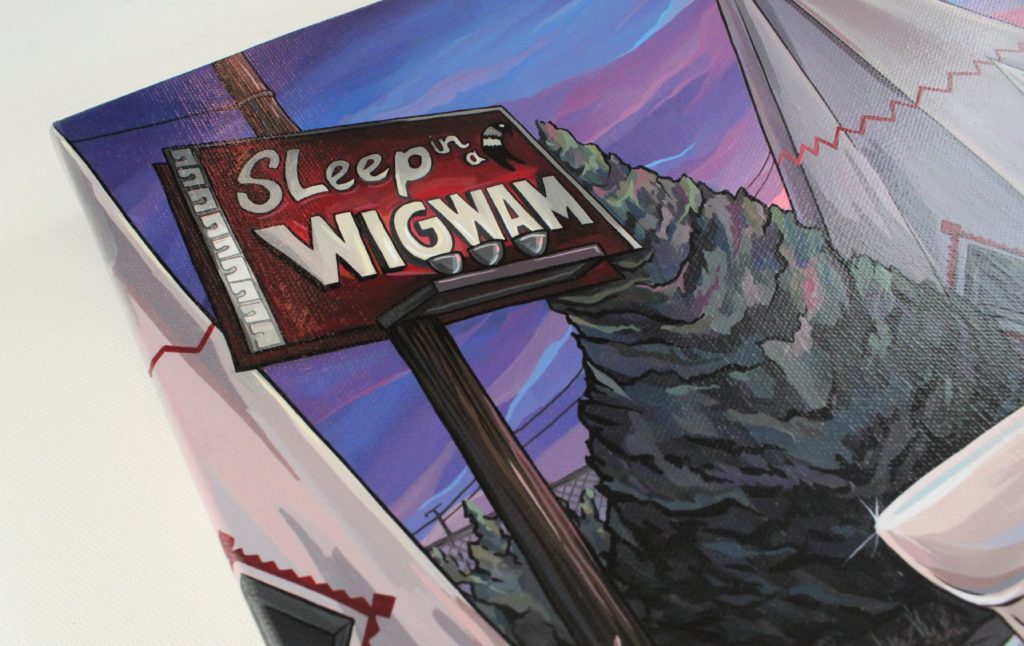 The final “Route 66” Painting. Become a “She’s Been Everywhere Insider” here, and subscribe to my newsletter!