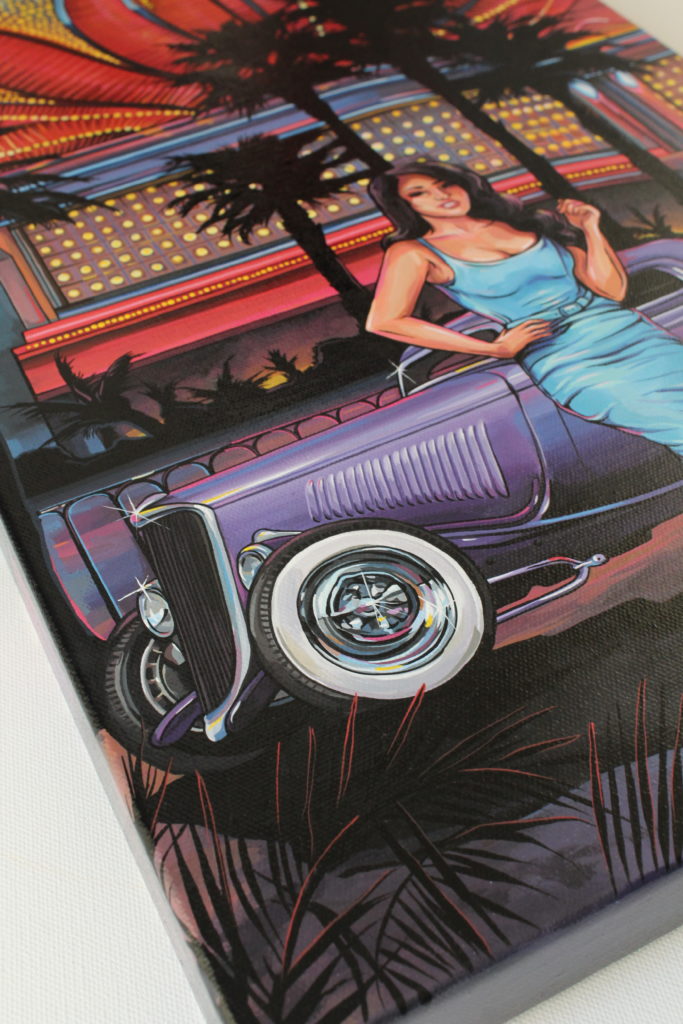 In 1931, construction began on the massive Boulder Dam (later renamed the Hoover Dam) in Clark County Nevada, drawing thousands of workers to the job site from all over America. Casinos and showgirl venues opened up on Fremont Street in Las Vegas, the town’s sole paved road, to attract the project’s workers after hours. Eventually, the first casino was built on Highway 91 called the Pair-o-Dice Club. However, the first casino and resort combination was the El Rancho Vegas, which opened with 63 rooms on April 3, 1941. Its success spawned a second hotel on what would become the Strip, the Hotel Last Frontier. Infamous American mobsters, such as New York’s Bugsy Siegel, took interest in the growing gaming city, and funded other resorts such as the Flamingo, which opened in 1946. Tourists flocked to the resorts—8 million a year by 1954—drawn by performers such as Frank Sinatra, Dean Martin and Elvis Presley, and by rows of slot machines and gaming tables. In 1959, the famous “Welcome to Fabulous Las Vegas” sign was built exactly 4.5 miles outside the city limits. The first MGM Grand Hotel and Casino, opened in 1973 with 2,084 rooms and, at the time, was one of the largest hotels in the world by number of rooms. At $1.7B, the most expensive hotel in the world at the time, The Bellagio, was built in the 1990s. Today, most of these casino resorts are still standing among hundreds of other restaurants and smaller casinos on the strip offering entertainment and dining options, as well as gambling and lodging to millions of tourist year round. 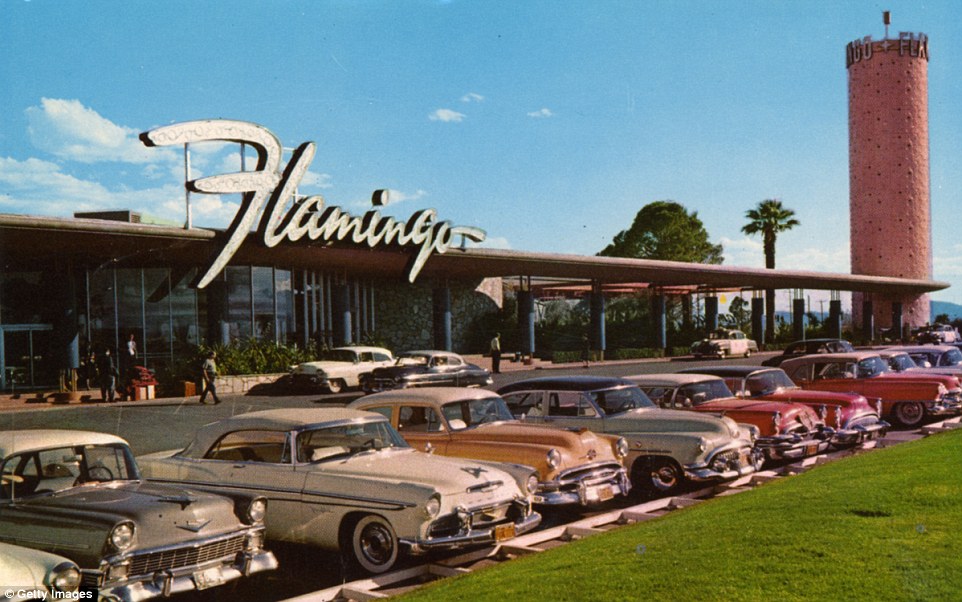 When my brother and I were old enough to drive, we would road trip his 1971 Plymouth Duster project car from the southern California mountains all the way to the Las Vegas Drag Strip in Nevada. We’d watch drag racing during the day and in the evening we would walk up and down the Las Vegas strip as teenagers, watching the street performers and dreaming about the days when we were old enough to get into the casinos and afford the resort hotels.

One of my favorite trips to Vegas was when I was in college working for a hair salon in California. The owner’s daughter was a professional dancer in the show girl performance of Jubilee. One year, we had the unique opportunity to not only see her show, but also visit backstage where I had the chance to try on one of their heavy decorative head dresses which was part of their costume.

When I opened Asphalt Canvas Custom Art, I timidly entered a national art competition with a painting I created for the SEMA show (an international automotive trade show hosted by the convention center in Las Vegas) and Red Kap Work Wear. To my surprise, I ended up winning the first place prize which gave my husband, Morgan, and I the chance to spend 5 days at The Encore Casino and Resort and attend SEMA 2019 as a featured artist for Red Kap Work Wear. In the evenings, Morgan and I had a blast dinning at different historic restaurants including the historic Batista’s Hole in Wall and playing blackjack at some of the Strip’s most famous casinos. It was the true Las Vegas Experience. 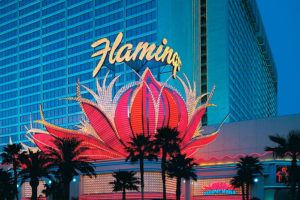 The Las Vegas painting was one of the last paintings I created in the collection. I had two very different ideas in which to showcase such an iconic place. One drawing featured Fremont Street at night. It was going to consist of a lot of intricate neon signage and reflections in the paint of the parked cars. The other sketch was inspired directly from the research I did on the history of Las Vegas and the Historic Flamingo Hotel and Casino. Ultimately, I decided that The Flamingo, with its infamous history and long lasting reputation as a must-see on the Las Vegas Strip, made for the strongest focal point for a Las Vegas inspired painting.

As a color fanatic, I found mixing and layering colors that mimic the glow of neon was quite a fun challenge! It’s something I’d like to continue to try in future paintings. Each of the neon circular lights were created by mixing the perfect color and applying the paint to the canvas with the end of a bobby hair pin. This gave the glossy enamel a slightly raised effect and kept the circular lights similar in size and shape. The black silhouettes of the palm trees and frawns where the last to be added to the artwork. I love the way they create high contrast and sense of neon glow from the brilliant colors of the neon lettering and shapes behind them. 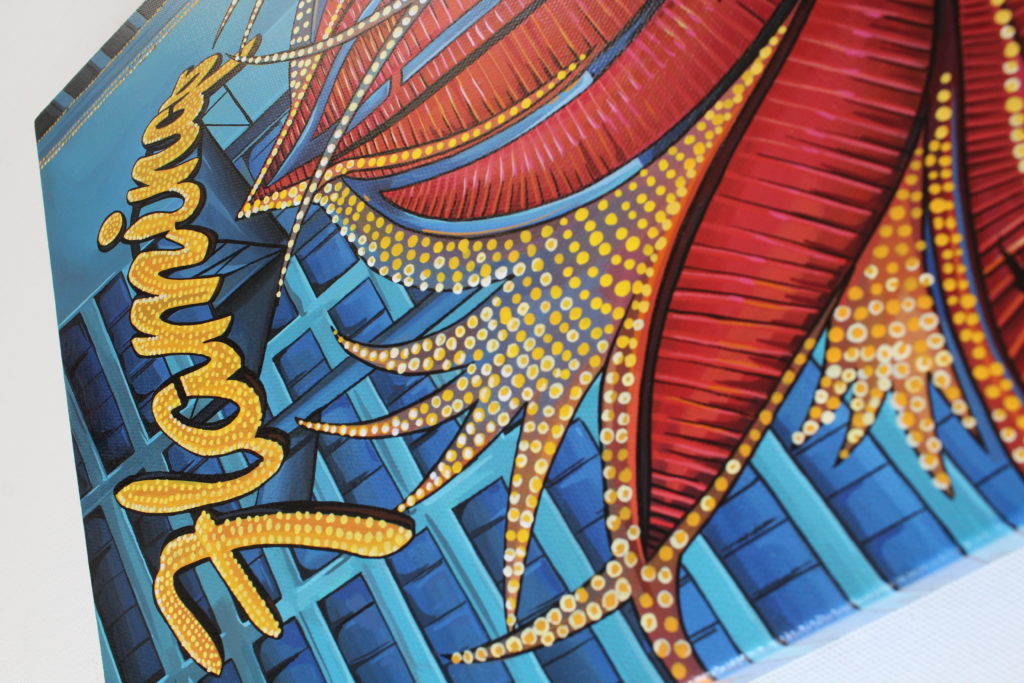 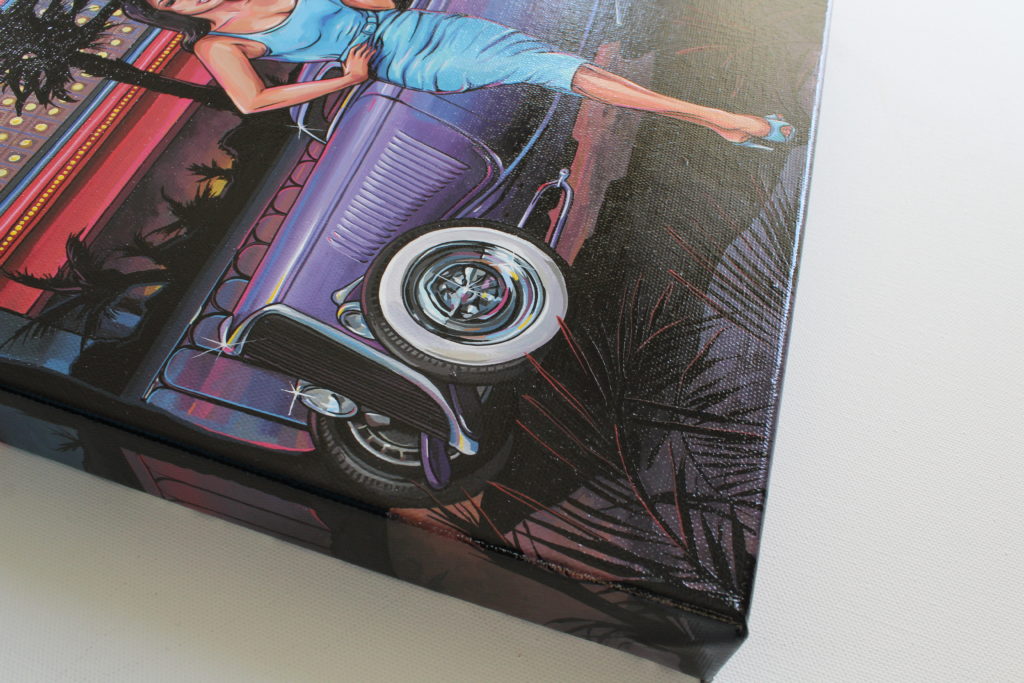 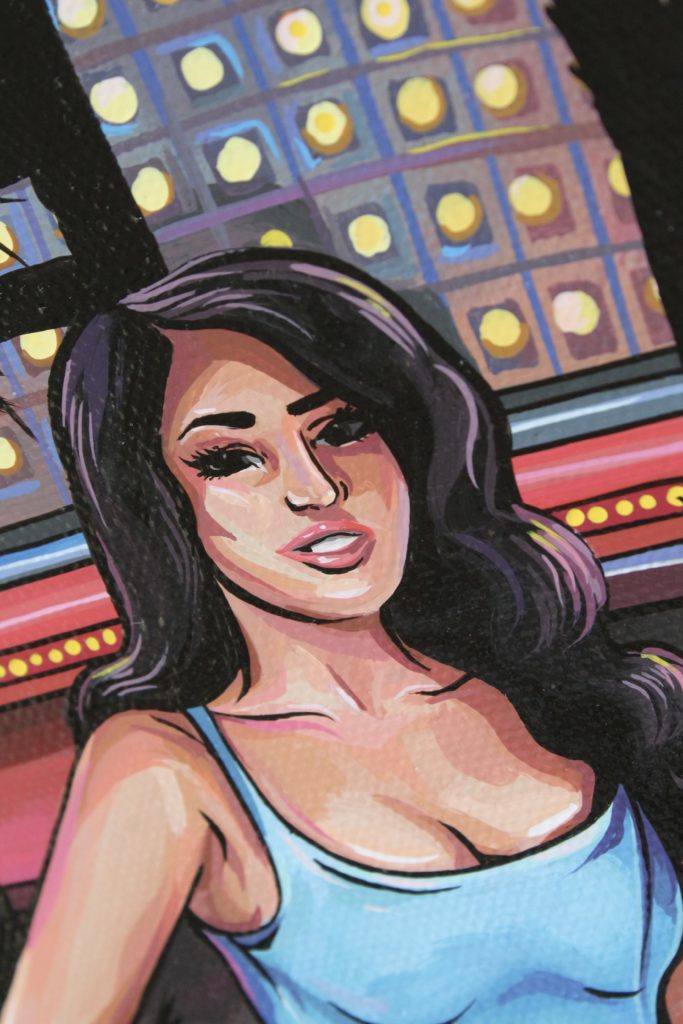 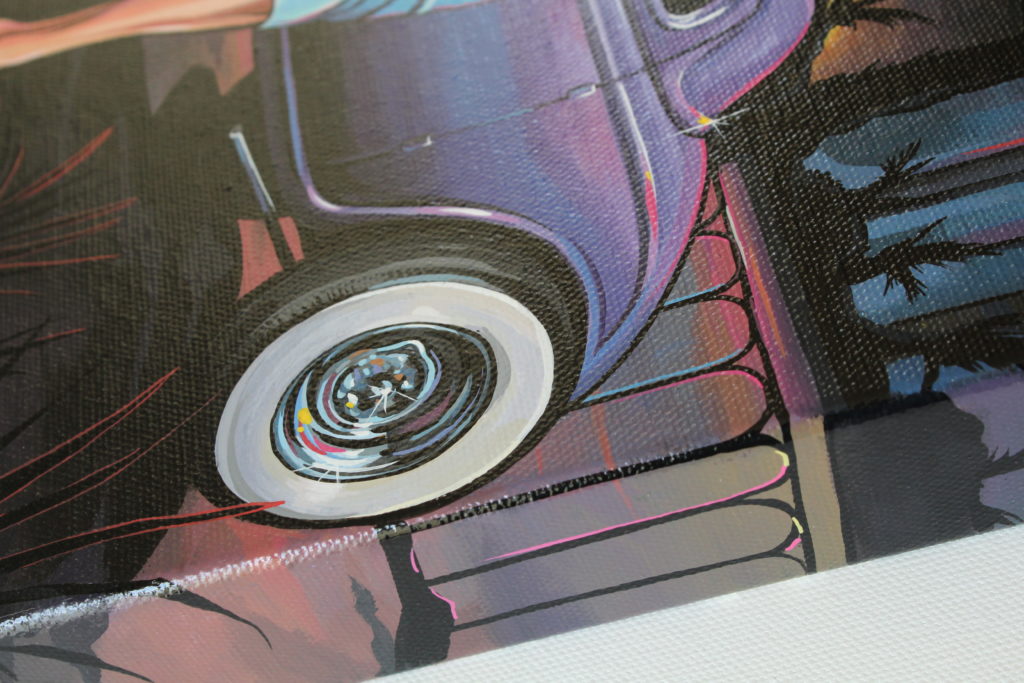 The car featured in the Las Vegas painting is widely known as “Foxley’s ‘lil Grape” which is a beautifully painted, purple 1934 Ford. You can read about the history of this stunning car in Issue #1 of Speed and Kulture Magazine. The stunning retro inspiration photo I used for the art was shot by Trent Sherrill of Speed and Kulture magazine. 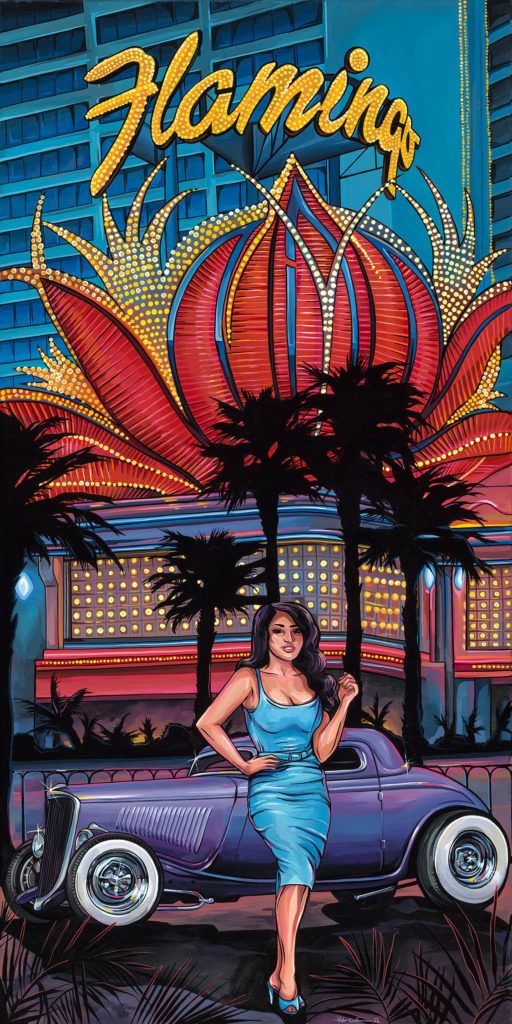 The final “Las Vegas” Painting. Become a “She’s Been Everywhere Insider” here, and subscribe to my newsletter! 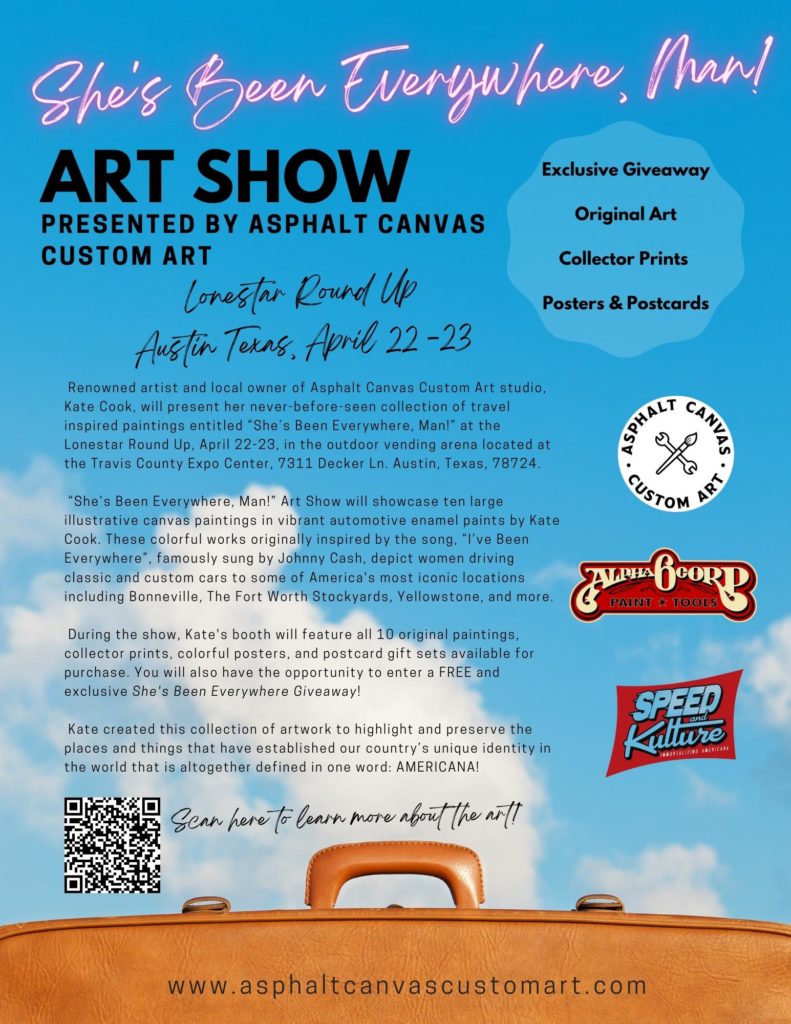