The Stonewall Motor Lodge is perfectly located in between Johnson City and Fredericksburg, Texas. Originally built in 1964, this restored L-shaped motel combines modern luxury with a retro twist, featuring 12 remodeled rooms and 4 private cabins, faithful to their mid-century modern roots, along with five RV sites. 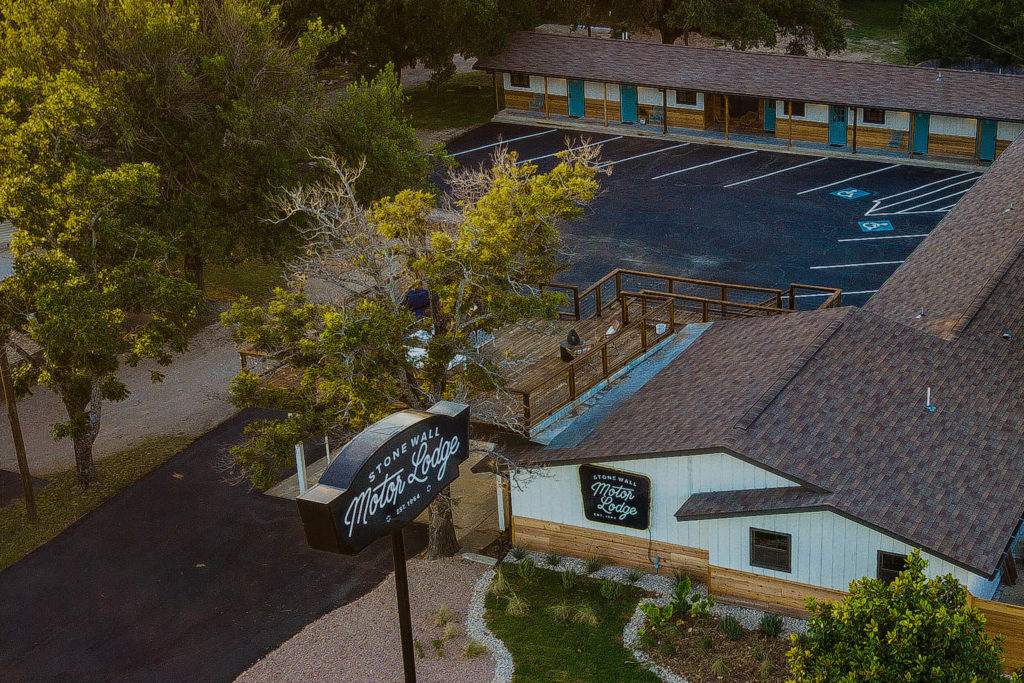 The history of this hotel is as much part of its charm as the renovations themselves. In 1964 Lyndon B. Johnson, a Stonewall Texas native, became the 37th president of the United States after the shocking assassination of President Kennedy. 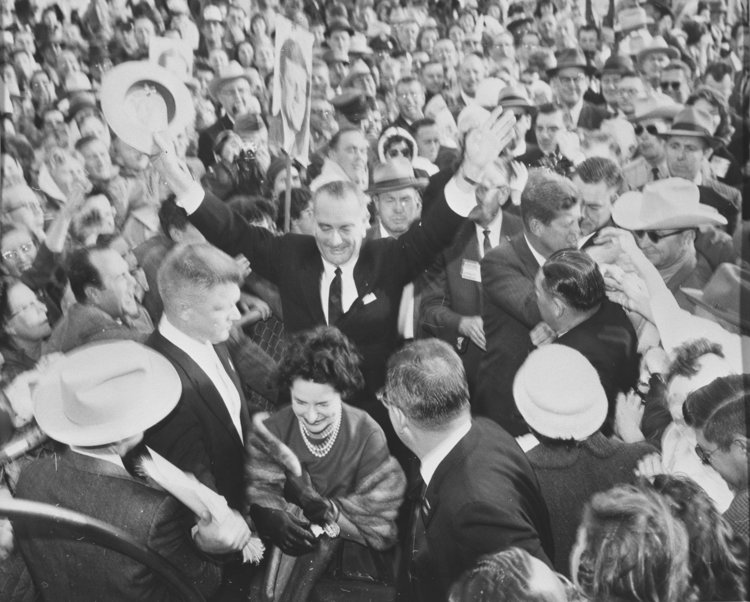 This sudden tragedy and new presidency resulted in the transformation of the sleepy hill country town of Stonewall, Texas. Home to the LBJ Ranch, also known as the Texas White House, Stonewall quickly became filled with reporters, photographers, Secret Service, celebrities, and politicians eager to be near the First Family when they visited their hometown. For the residents, the new hustle and bustle brought business opportunities. Tillie and Kermitt Hahne, old family friends of the new president and his wife, saw a need for accommodations and eventually opened the Stonewall Motel. Twelve rooms, including one reserved for the Associated Press and their photography darkroom for developing film pictures, allowed the press to be on hand when news broke. Today, you have the unique opportunity to stay in that press room at the Stonewall Motor Lodge, while on your Texas Wine Country getaway.

You can read more about the history of the motel here.

In recent years, I had collaborated with the on-site managers and the owner of the hotel, Anita Ortiz Lubke, in creating a hand painted metal barn sign for the new outdoor extension of the motor lodge. The team at the motel have ramped up their backyard event barn into a hill country hot spot where chefs, musicians, and wine club members gather for unique private events. This led to a new mural project that Anita hoped would act as a social media highlight for hashtagged pictures at the motor lodge. The eight foot tall event barn doors were the perfect “canvas” to create a colorful mural that would attract visitors from all around.

Anita gave me free creative reign on what to design for the mural at the motel. She gave me a couple points of inspiration in saying she loved that the Stonewall Motor Lodge, also known as the SML, was located at the heart of the Texas Hill Country Wine Trail. She didn’t want the artwork to “match” the hotel’s brand, but wanted there to be some sort of tie in to the motel’s unique LBJ history. With this guidance, I came up with three different designs from which Anita and the staff to could select from.

Ultimately, they loved the flower design and the quote by Lady Bird Johnson that read “Where flowers bloom, so does hope”.  It was important to Anita that the Stonewall Motor Lodge mural would neither be too feminine or masculine. I edited the sketch to change the mod 60’s flowers into the symmetrical mid-century modern flowers with an ingenious idea by Anita! I finalized the sketch of these retro looking bluebonnet shapes and we found the perfect balanced design! 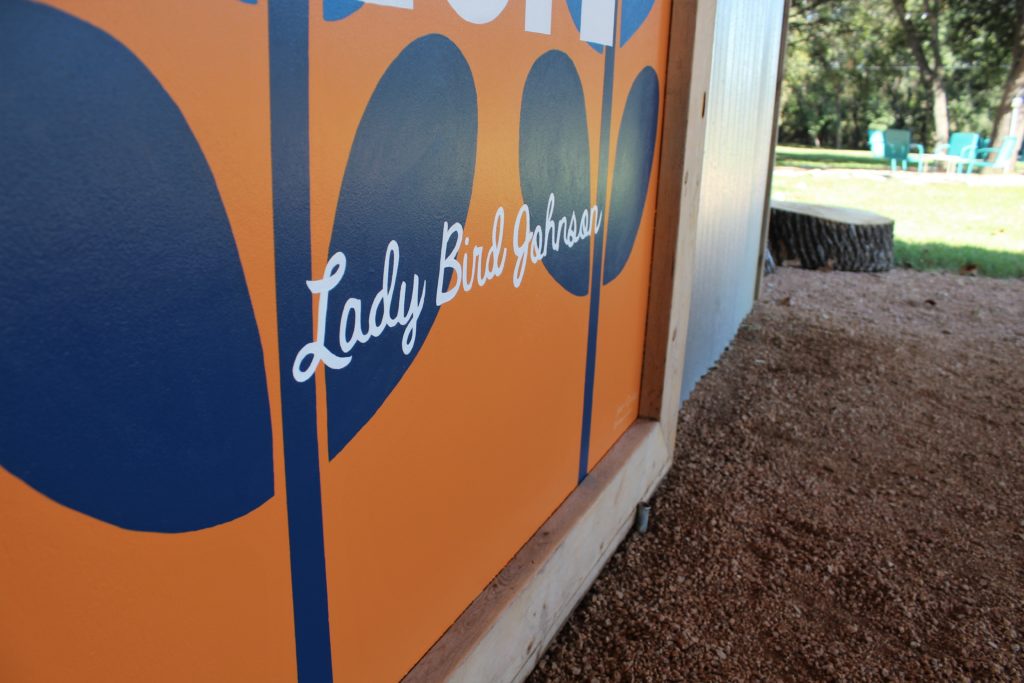 I spent three days at the motel to create this mural. I am thankful for the SML’s hospitality! I was so grateful to have the help of my mom, who worked as my assistant on some of the large areas on the doors that needed big blocks of color with many coats of paint.

Before my arrival, Tim the motel manager, had already graciously sanded the doors down to prep them for paint. When my mom and I got there, we painted the orange back drop, and that evening I traced my sketch onto the barn doors using an old projector. For the next two full days I painted in the shapes and letters. We got to meet a few of the kind motel guests, as they would stop by to see the progress of the mural while we worked on it. 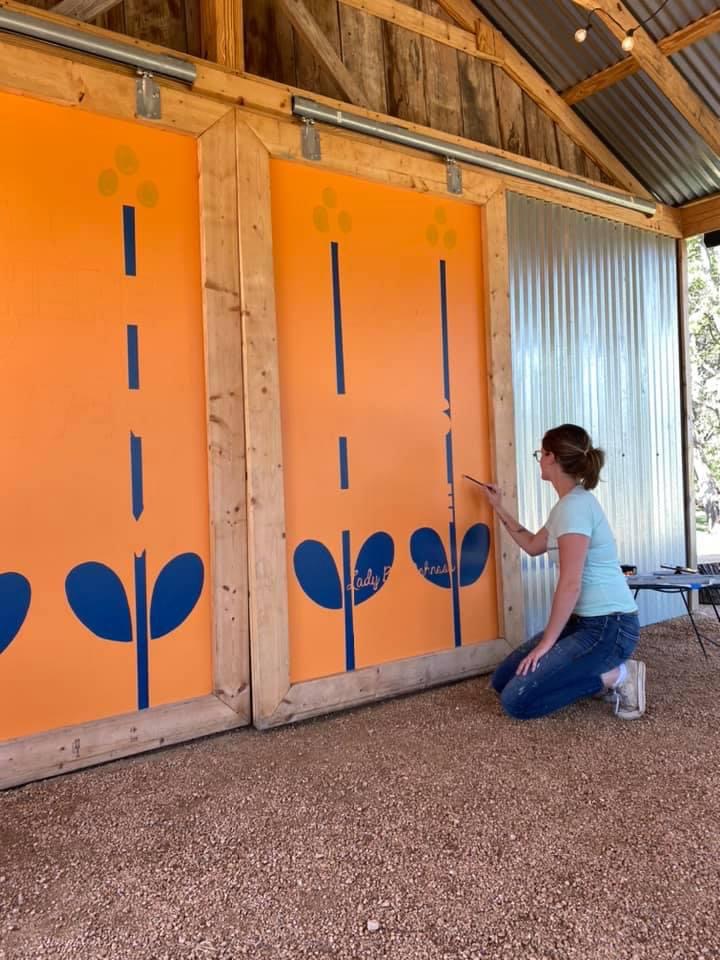 I used Behr exterior enamels to paint the entire design by hand. Props to full time mural artists and letter heads, that work is not for the faint at heart! This extremely symmetrical design on rough wood called for precision paint lines and 3 layers of painter PER SHAPE. I learned a lot in the process of creating the mural and look forward to seeing the design come to life on some upcoming merchandise the motel plans to offer to guests. 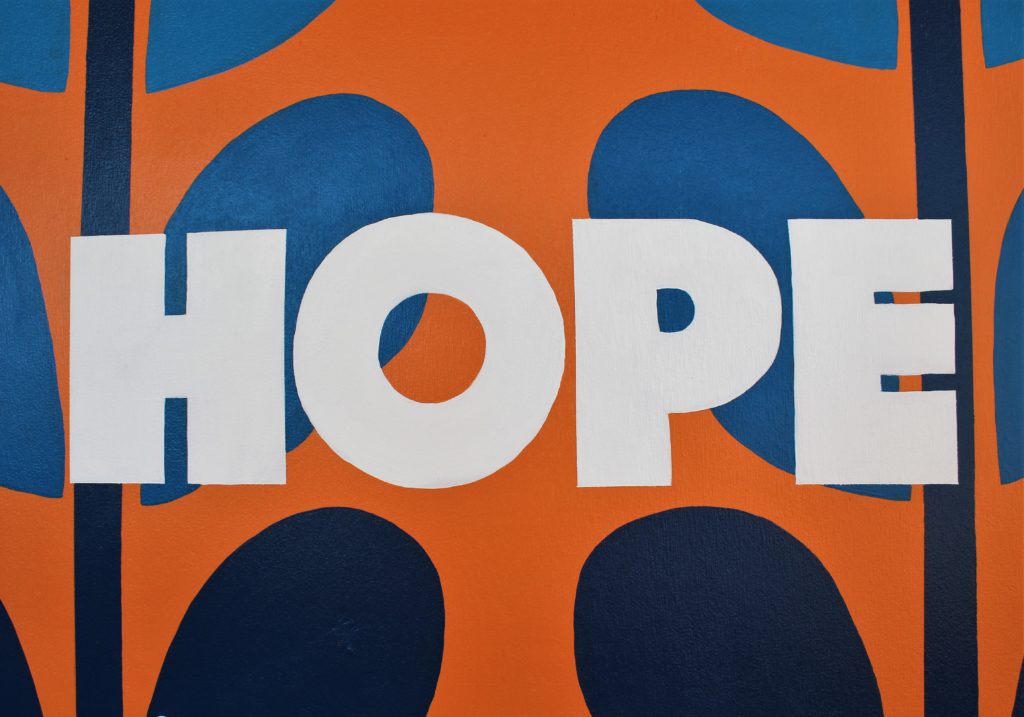 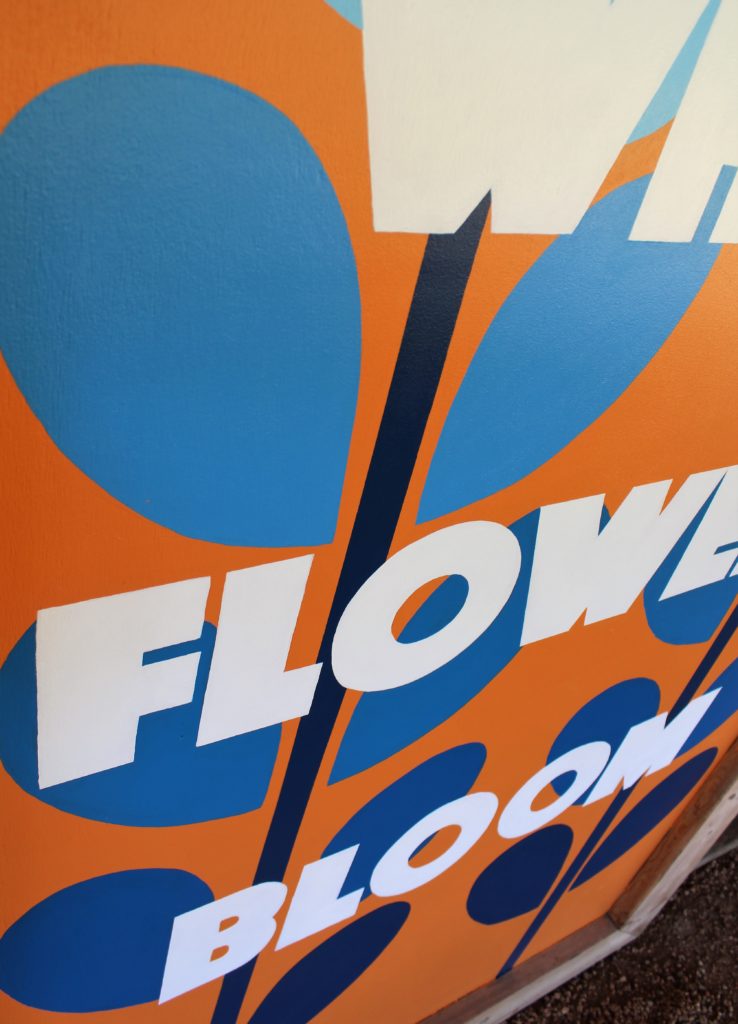 I believe that the final Stonewall Motor Lodge mural is a colorful and uplifting piece of art. I hope it will bring a smile to people’s faces when they visit the SML. The mural is located behind the motel on the sliding barn doors of the event barn nestled under three acres of beautiful oak trees and café lights. Be sure to tag your stone wall mural photos with #flowersbloomatSML on Instagram. 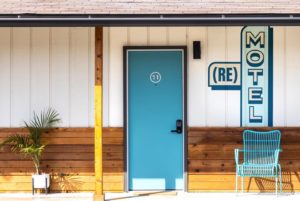 The coolest part of this project is to know it will featured along with the Stone Wall Motor Lodge in a well-deserved spotlight in a show called, “RE- Motel”, on the Magnolia Network/Discovery TV. My husband, Morgan and I are so excited to be a part of the private event that the SML plans to host at the barn for the producers of the show while filming the feature.

Catch our feature on Season 2 Episode 8 of (Re) Motel HERE! 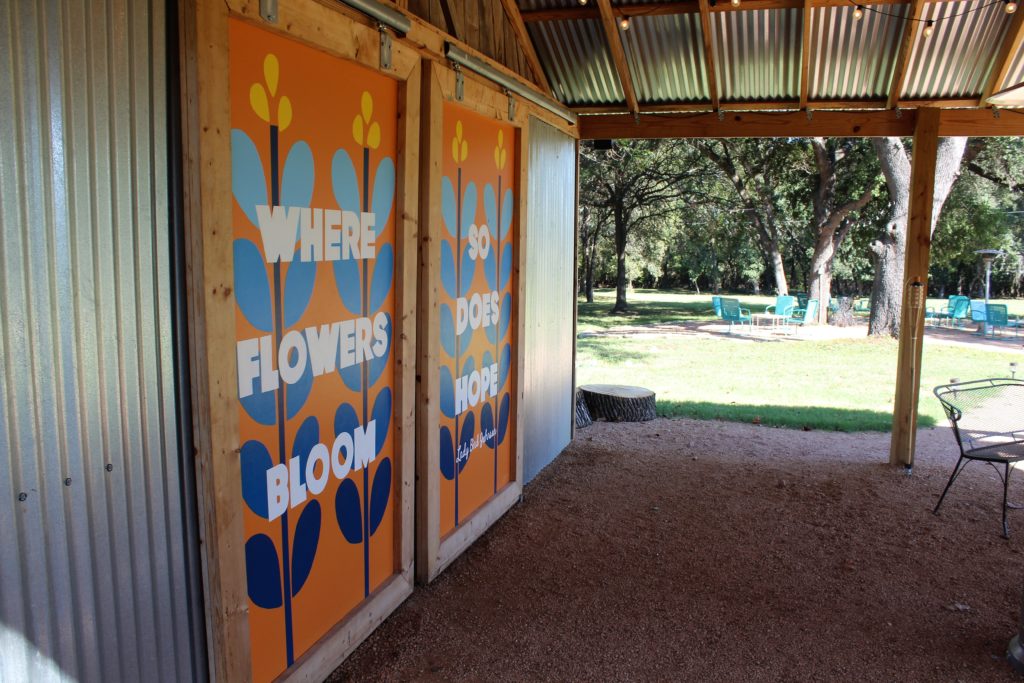 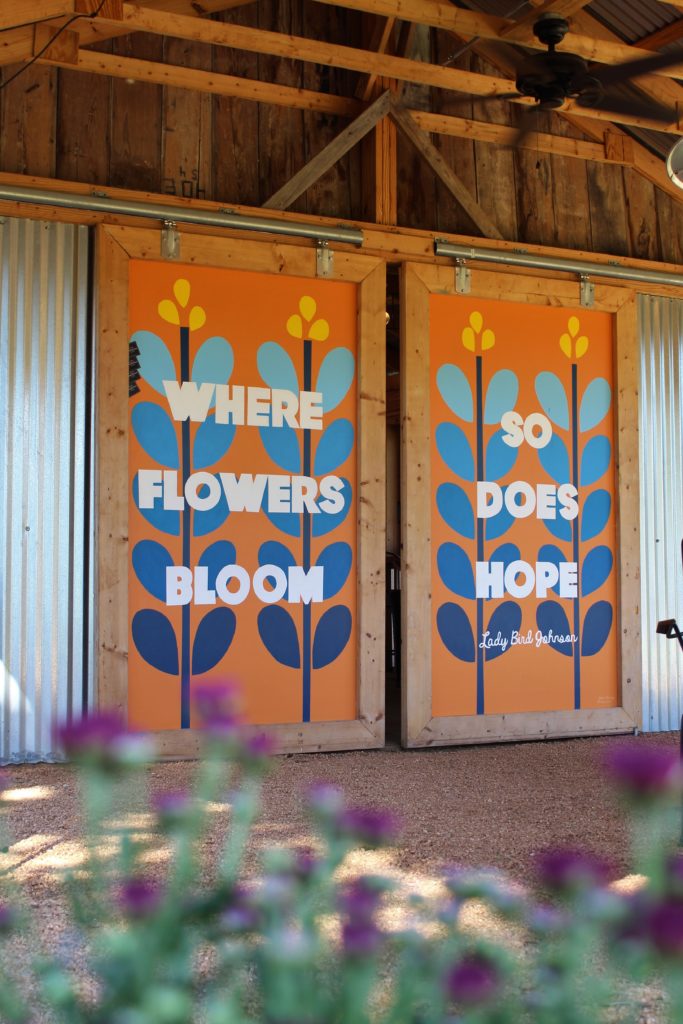 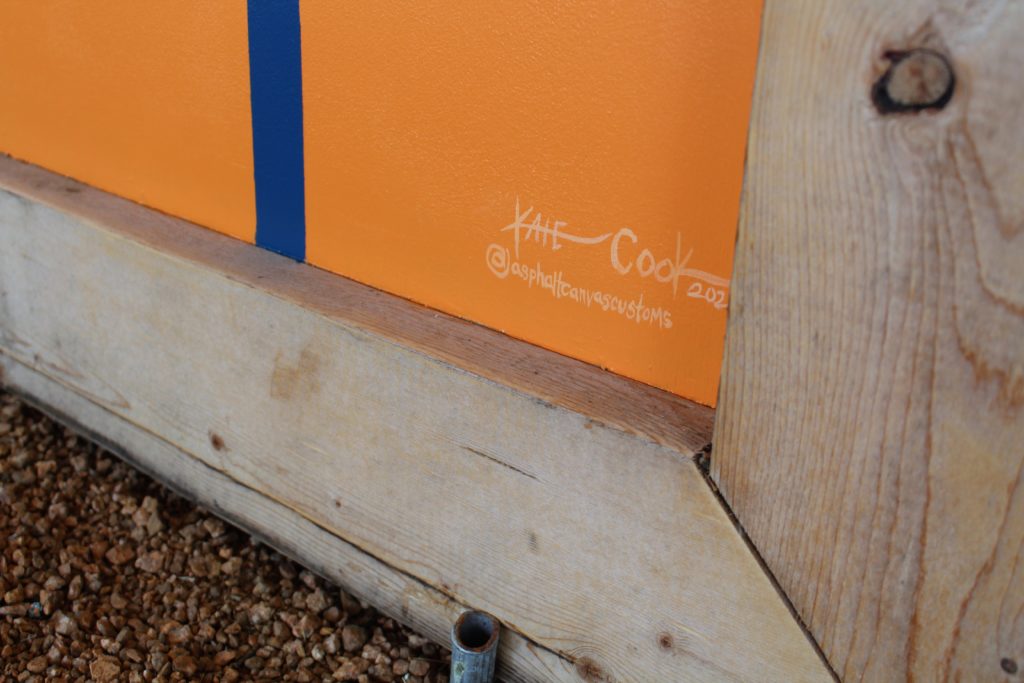 It is a true joy for me to collaborate with people like Anita. Working with her on multiple artistic projects throughout the years has been nothing short of memorable. Her team and the labor of love they’ve invested into this historic little motel is so inspiring to me. It is a dream of mine to use my art to help places like the SML and any roadside attraction be restored back to its former Americana glory in a modern way that will spark the interest of future generations to enjoy and learn from. I’m grateful to be a small part of the revival of the SML byway of painting this new Stonewall Motor Lodge mural.

Book your stay in the heart of Texas wine country at the Stonewall Motor Lodge here! 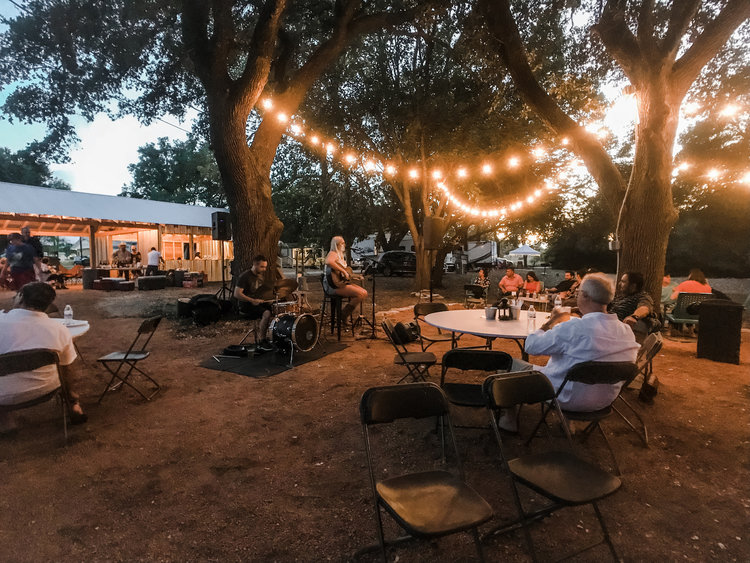 You can check out a small collection of the other murals I’ve had the pleasure creating in my Wall Mural Gallery!

Previous Post: « The Pacific Coast Highway: “She’s Been Everywhere, Man!”
Next Post: Create Your Own Certificate of Authenticity + Customized Templates! »