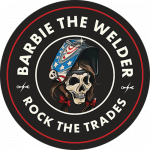 Rock the Trades in collaboration with Barbie The Welder.

Barbara Parsons, known professionally as Barbie the Welder, is an American metal sculptor, teacher, and published author. She has produced sculptures for a number of significant clients including Harley Davidson and Miller Welders. She has been the featured artist at numerous welding exhibitions and trade fairs including SEMA.

She has teamed up with Rock the Trades™ workforce development, created by Surehand. Rock the Trades is dedicated to celebrating the American industrial worker. Their goal is to raise awareness of the skilled trades as a rewarding career path to benefit high school students wanting a career in the trades industry. Grab yourself a free Rock the Trades sticker and read a little more about the trades people in my own family here!

Barbie and I had worked together previously on the custom design I painted for her welding skull logo I painted for her welding business. This time, we worked together to design a custom, hand painted and official Barbie the Welder | Rock the Trades welding hood, graciously provided by Miller Welders. Barbie gave me creative freedom for the majority of this design, but requested that we use the phrase “Dirty Hands, Clean Money” in conjunction with an all American color scheme for the overall creation. This welding hood was created to highlight the American tradesperson and the great career opportunities that are available to graduating high school students in the skilled trades industry. 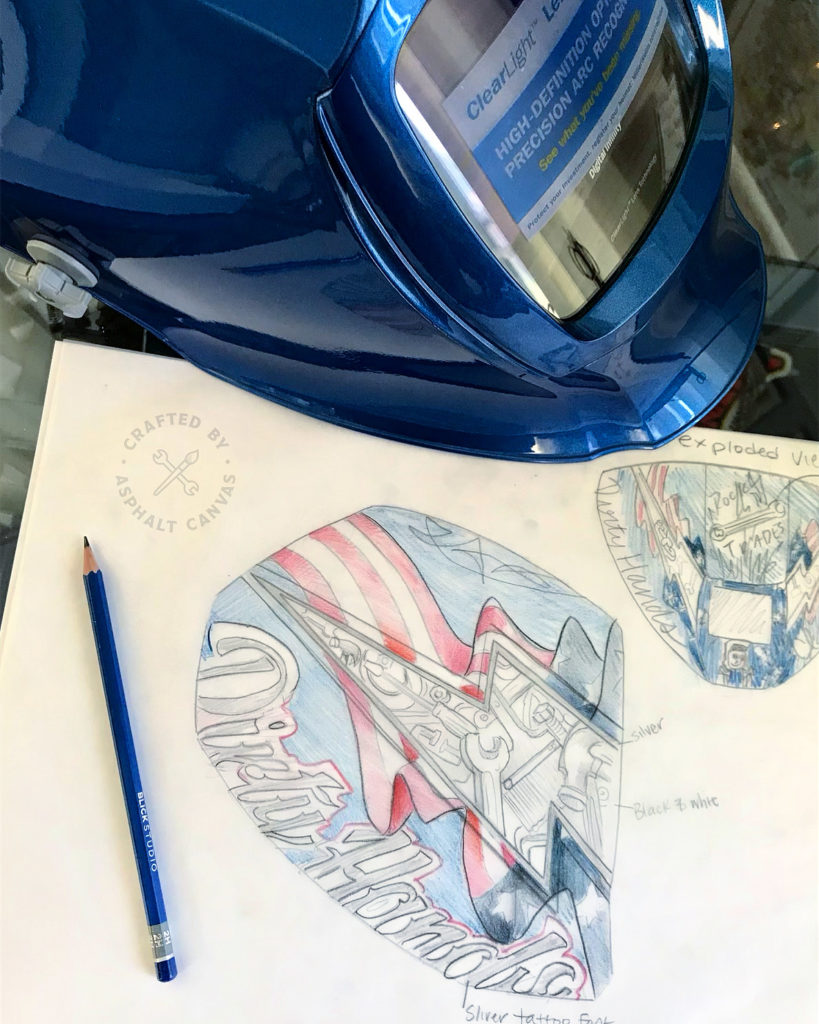 This welding hood will be given away to one lucky winner on August 8, 2021 through an Instagram giveaway hosted by the Rock the Trades. Head over to @Rockthetrades to enter to win this one-of-a-kind custom painted welding hood! 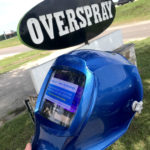 While I was working on the pencil sketches for the design, we had the flat black hood prepped and painted with a beautiful Viper blue metallic color by Overspray Customs in Temple, Texas.

After the final line drawing was approved by Barbie and the team at Rock the Trades, I transferred the sketches onto the hood with Saral paper. This step left a chalk outline of the artwork on the hood for me to follow while painting. 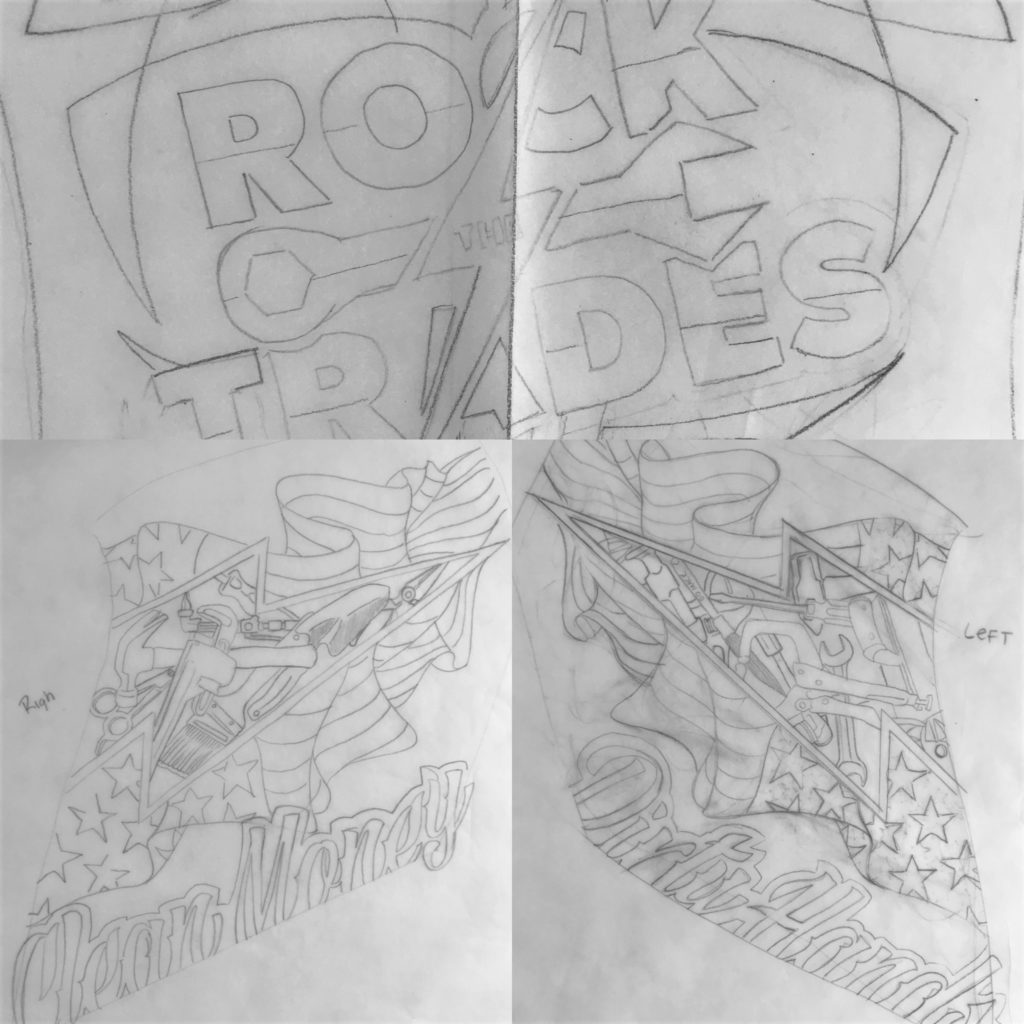 The first thing I did was tint the clear size with yellow enamel color so that I could see where I was painting the it onto the hood (“size” is a fancy word for the glue that clings onto the silver leaf sheets). Then, I brush painted in all the areas I had previously mapped out on my sketch of where I wanted metallic silver look. Once the glue was tacky I applied the silver leaf. I added an “engine turned” circular pattern into the leaf on the lightning bolt outline with a handmade tool from Valley Kustoms. Finally, I sealed the silver leaf with the same size/glue I used to stick down the leaf. The remainder of the artwork was then meticulously painted with multiple layers and a lot of details in Alpha 6 high gloss enamels. 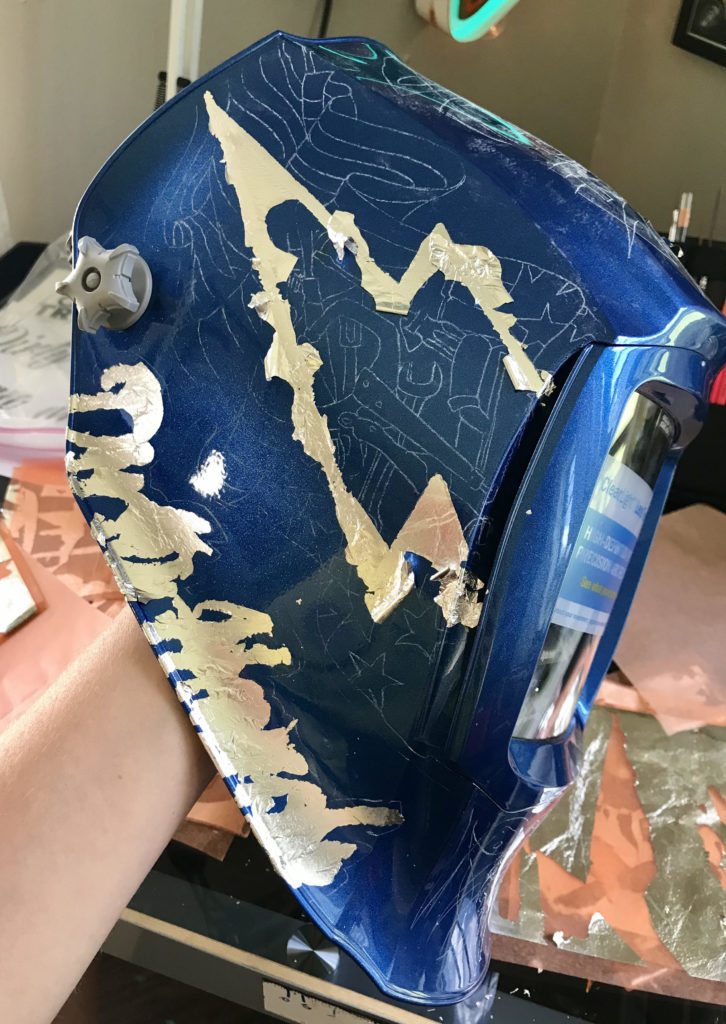 The final helmet is a red, white, and blue tribute to the American tradesmen, featuring hand painted tools representing different trades within the silver lightning bolt frame I designed to mimic the Rock the Trades logo. I included a pair of scissors, trowel, wrench, pipe wrench, wire cutters, and of course, a pinstriping brush, among the black and white collection of tools in the artwork. Barbie’s logo was placed on the front and center of the hood surrounded by pinstriping. The “Dirty Hands, Clean Money” font was inspired by Barbie’s love and respect (mine too!) for the art of tattooing. I designed the script lettering by hand using a couple different references I found online. The silver and enamel details of these letters are what took the most time because I am still trying to master the technique of gold and silver leafing. I believe the final lettering design flows well with the curves of the helmet! I painted the Rock the Trades logo to look like chrome and pinstriped around the entire design to tie everything together. The top of the hood reminds me of a 1980’s rock album, which was not intentional, but I believe works so well with the Rock the Trades initiative and brand. The silver leaf, high gloss enamels, and the metallic sparkle of the blue background on the helmet catch the light differently and play with the viewer’s eye.

This helmet was created with intentions to be a mantel show piece of fine art. Barbie and I were intentional with a design that would portray the very best of the companies behind this Miller welding hood giveaway, as well as the work ethic and spirit of the American industrial worker.

It’s always a joy to work with Barbie the Welder. She and I have designed some really cool art together over the years! Be sure to check out the larger-than-life Tradesmen sculpture she is building in conjunction with Rock the Trades. The design incorporates real trades tools sent in from her audience from all over the country! I look forward to the reveal of that piece of art, but until then head over to her social media channels to take a behind the scenes look at the creation process.

I also enjoyed meeting and working with the team at Rock the Trades! I am appreciative of their desire to utilize different forms of art created by hand as a way of channeling their marketing messages to the masses! Their goal to inform and empower high school students who want a career in the trades industry is noble and important. I’m thankful to have a small part in spreading the message. 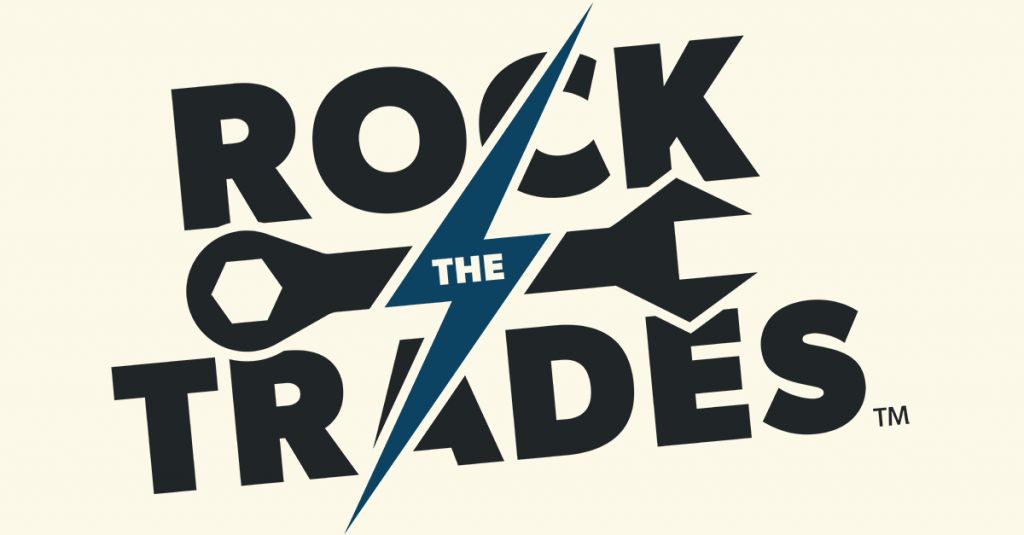 Kate, you crushed it!! I’m in love like I knew I would be. You’re amazing, sister. I’m so grateful you said yes and made time for this project. Someone is going to be very very lucky !!

The Tools I Used to Make This Art :

If you enjoyed this custom art feature, check out the custom painted, Biltwell helmet I created for HiRoad, by Terry Madden!