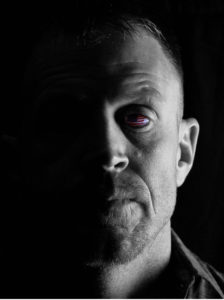 This was project for Joshua and Jill, a couple who have become wonderful clients and collectors of my artwork. A few years back Joshua surprised his wife with a painting I did of her as a United States Marine Corps inspired pinup girl with an American flag as a backdrop. This time around it was Jill who reached out to me to surprise her husband with a portrait of him! (How cool is this couple?) Jill had a clear vision of what she was hoping for with this portrait including Joshua in uniform and backdrop made entirely of hand painted flames! She provided awesome reference photos of her husband in his firefighting gear, his favorite tools for the job, and detailed photos of the fire truck and logo design of his station! Another very cool detail she asked me to include was her husband’s American flag glass eye that is an ever present reminder of his service in the United States Marine Corps, where he lost his eye in an IED blast in Iraq. (Some photos may be blurred to protect the privacy of the client.) 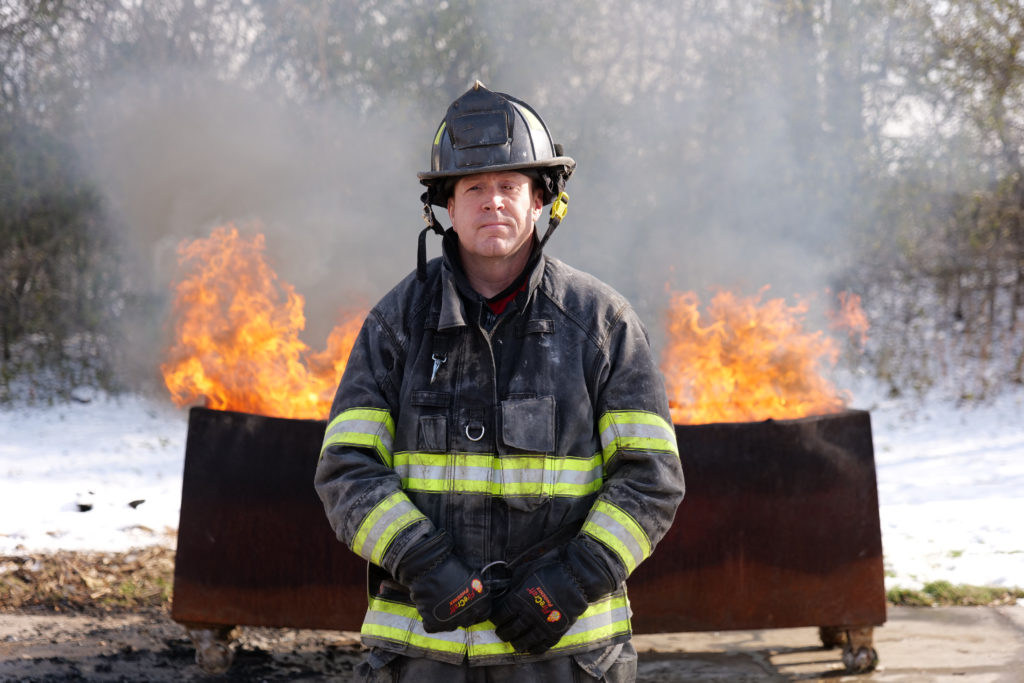 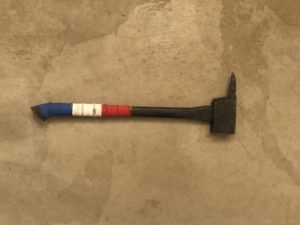 We started with a line drawing sketch of the original photograph. With Jill’s detailed reference photos and research, I was able to really personalize the drawing by adding the station’s logo to the fire truck and positioning Joshua’s hands to be holding his favorite red, white, and blue handled axe. I had initially wanted to incorporate a “wild fire” scene in the back ground with trees and fence line as you can see in the photos of the sketch. Once the line drawing was complete, I transferred it to a 16×20 hand built canvas with a light projector. 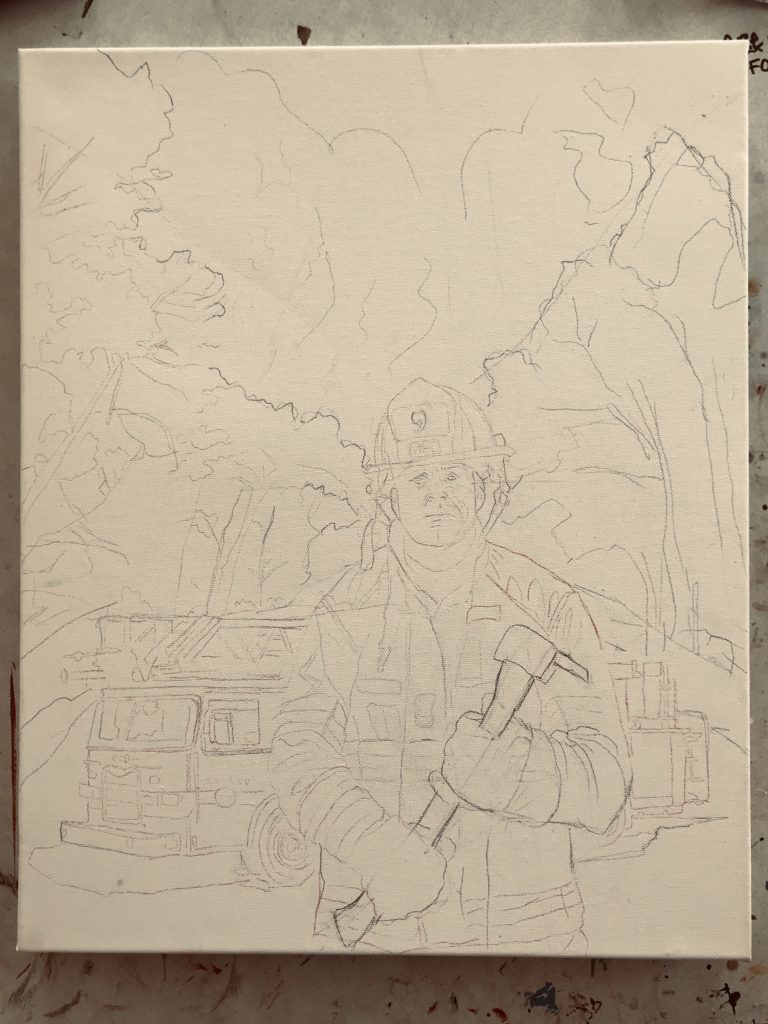 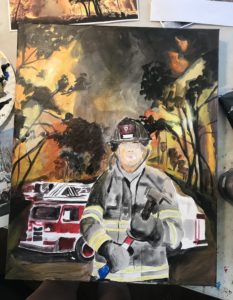 First, I painted the entire canvas with big blocks of color in acrylic paint. This is called an underpainting. These color blocks act like a road map for where to put what color once I began painting with enamels. This paint layer also acts as primer coat which soaks into the dry canvas before adding the glossy enamel paint layers over top.  After evaluating the under painting together, Jill wanted to delete the forest looking scene. She put faith in my abilities and requested that the entire background be made up of solid flames!

To start, I broke down a couple pictures of fire I found online, into simple shapes and a list of colors as they relate to the heat of the flame. I took advice from 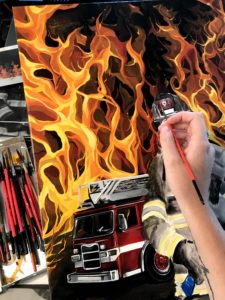 artists like Mike Lavelle via YouTube on what makes a painted flame look realistic. I painted over the forest fire scene with enamel paints in an extremely dark red/orange color. As I built up the layers of paint, I eventually added details in a very bright yellow color to finalize the flame background adding sparks to the tips with by flicking the paint brush with my thumb toward the canvas. Painting the fire engine and the portrait of Joshua came next. As with all portraits, painting a successful one comes down to focusing on shadow lines and highlights. I ended up adding a highlight line around the entire body shape of Joshua to make him look like he was  back lit from the fire. This serendipitously gave him a glow which made him look like a heroic character from a comic book or movie. I love it! 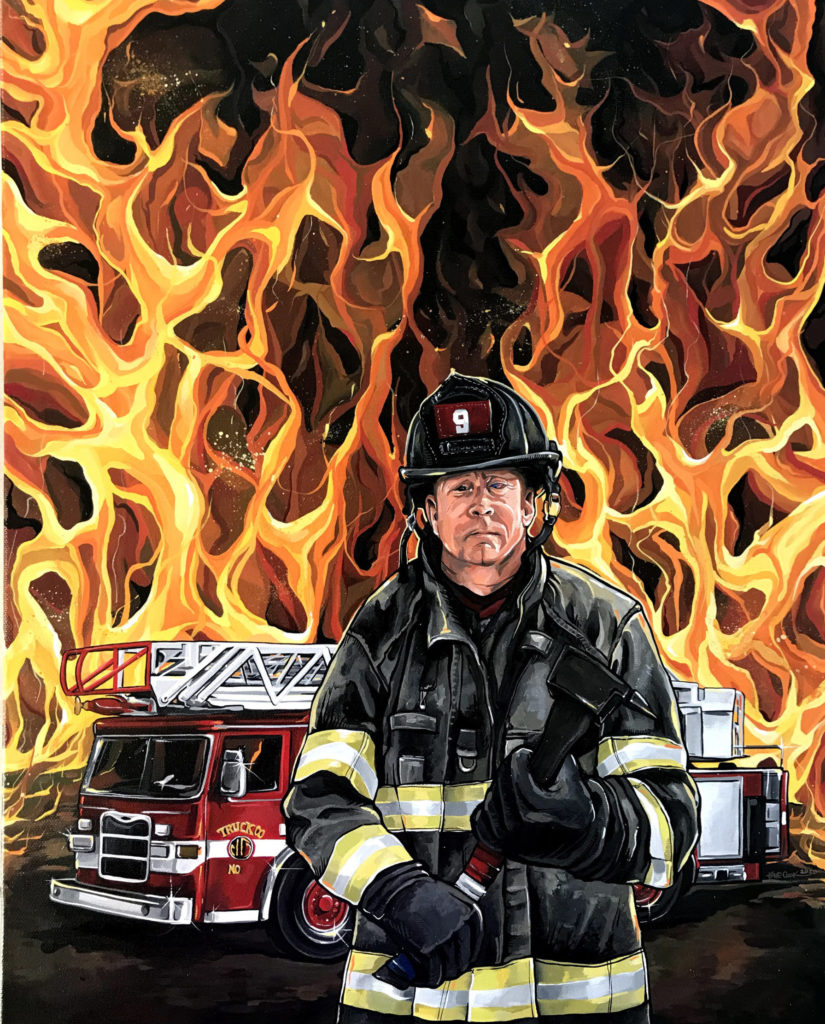 I always work from the background to the foreground of any painting so that the image closest to the viewer is painted last. In this case, the flames where the background and the portrait of Joshua was the foreground. In conjunction with smart color mixing and attention to detail, the reason for doing this is to help trick the eye of the viewer with the illusion of dimension and depth.

I was happy with the texture I was able to create on Joshua’s jacket. This was done by dry brushing (using a frayed out brush and very little paint) on some of the larger areas and allowing the natural texture of the canvas to be visible under the paint. My challenge with this painting came with painting flames for the first time. I was grateful for the trust and encouragement Jill gave me to execute this kind of painting! I am very happy with the final outcome. The surprise was a great success with the couple. They now have a true “His and Her” set of custom paintings. 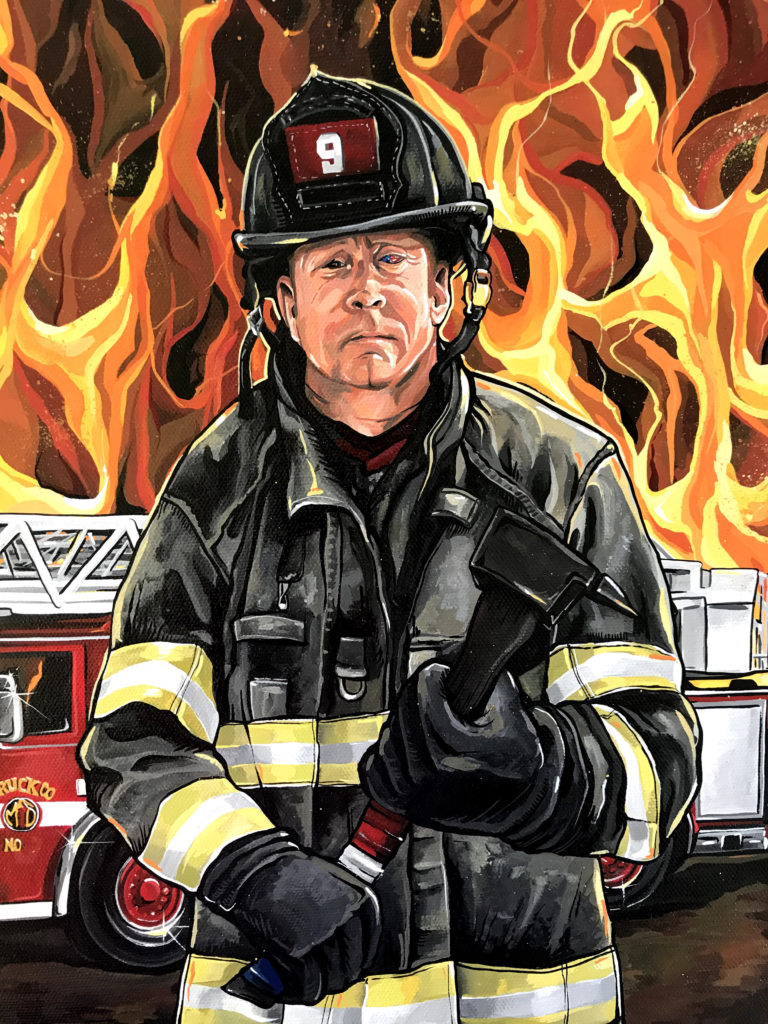 “It is absolutely perfect. You can post it all over social media after I give it to him!! It’s great! And it is perfect next to the one he had you make of me. So fun! I can’t wait to see his reaction!!…He loves it!!” -Jill